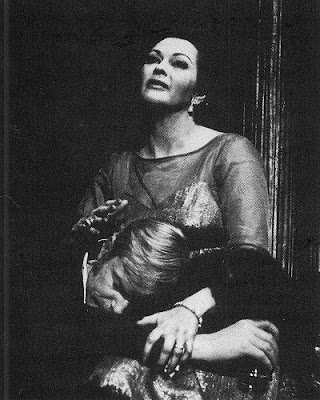 The Original, and Still C(h)ampion

Better get comfortable, carissimi, because today finds me in Marathon Mood, and this is going to be rather long.

Our recent rejoicing in the deep cleverness of brilliant Café regular Bill, combined with the genius that is Dame Edna, set me off thinking how interesting it would be to look at as many available versions as possible of that warhorse of divas d'un certain age everywhere, Mr. Sondheim's funny, haunting, triumphant "I'm Still Here", from his equally all three Follies. I hope you agree, because here we go:

Here, despite the louche talkshow setting and a flub or two, Miss De Carlo proves that, having introduced the song and the character of Carlotta Campion, she owns the song.

Dolores Gray brings a bemused/jaded, world-weary tolerance to her interpretation...

Eartha Kitt's Carlotta is characteristically funny, fierce, and just a tad scary (but more of that to come)...

There is something simultaneously wonderful and heartbreaking about Ann Miller's rendition; perhaps it's the sense that Carlotta, like much of Follies, is only going to get harder to cast as we lose performers who bring their own backstories to the role.

Karen Morrow makes it brassy and raucous - which only highlights the pathos when she takes it down a notch. She's a less glamourous Carlotta, but perhaps the most convincing of all with argot like "stinko".

While age, experience, and name-recognition do add a certain something, it's not an absolute necessity (although Stritchie raves against anyone much younger than her daring to assay the number). Here, cabaret illusionist Randy Roberts, visually channelling Ann Margret but singing in his own voice, makes a quite respectable case for the more unorthodox performer.

Adaptations of the song, however, (in addition to the daunting prospect of incurring its creator's wrath) can be jarring.

Before she became a textbook (and text-faithful) Carlotta in London, Miss Eartha pulled the song to shreds in her club act; it kind of works, but more because it's Eartha than because it's Sondheim.

Shirley MacLaine's customized turn in Postcards from the Edge features a new lyric by the Master, but it's all pretty far away from Follies.

Many, many others have sung the song, of course: I'm not terribly fond of Miss Burnett's, from the New York concert version (it's a song that just shouldn't be sung in a cocktail dress; I'm sorry, but there we are), and there's no good quality video I could find of Christine Baranski's take. Bill says his favorite is Nancy Walker (with legions of Sondheim fans apparently agreeing), but she too is elusive, although I'd love to hear it. Dame Shirley Bassey includes it in her act, and if she could be induced to act it rather than sock it over the bleachers, she might do quite well. Personally, I'd like to see Bette Midler try it on. If she could rein in the bathos, she could kill.

Why does the song work? Of itself, it's in some ways the culmination of several threads in musical theatre: the Big Lady number, the 11:00 O'Clock Song, even, in a way, with its references to stars, fads, and markers of time (Windsor and Wally! Brenda Frazier! Religion!) the Cole Porteresque list number. It certainly gives an actual Survivor Star a lot to work with, but at the same time I think it reaches something in the audience; we love to see someone like Carlotta stake her claim on being heard, because if we recognize what she's been through, and know she's still here - so are we.
Posted by Muscato at 1:09 AM