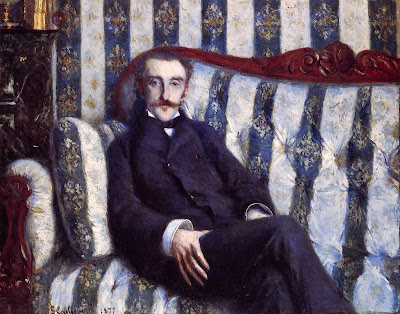 Café regulars with an eye for detail may notice that I've had a little work done, and as a result look a great deal less like faded 30s diva Kay Francis and a great deal more like this Portrait of a Man by the suavely cosmopolitan French painter, patron, and general bon vivant Gustave Caillebotte.

No special reason for this avatar-update, although I do admit to a certain creeping gender dysmorphia (well, more than usual) as a result of several years of hiding behind the blasé face of Miss Francis and thought it might be nice to present a public face to the world that at least slightly more closely approximated reality.

I have to admit, though, that while I may often look as quizzical as M. Caillebotte's gentleman friend, I may not be, at least on an ongoing basis, quite as intimidatingly dapper.

I had thought of opening the New Look for a competition, or at least a vote on a selection of possibilities, but at the moment I think it far more important to solve the great question of just what that was that Constance Bennett thought appropriate to wear to a family wedding. Vote early and often!
Posted by Muscato at 1:55 AM