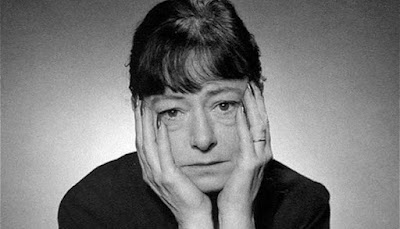 "'I,'" said my Grandmother Muscato, regularly, "is the dullest word in the English language."

It was a word, one was warned, that should rarely if ever start a paragraph; it was a word that, used just wrong, could draw her sharpest glare. Along with "hate," (another word about which she had strong feelings: "We don't hate, dear; we may dislike or be fond of or even not abide, but hate is for sin and Hitler."), "I" was something that marked people out as something other; something, in fact, (in another pet phrase), "not quite our kind."

Well, with all due apologies to dear GM, I'm afraid that today is going to be a little bit of an I-ful, as it were.

I've not been, you may have noticed, the most reliable of correspondents, nor the most creative or insightful. The truth is, I fear, that I'm in a bit of a slough, and have been, I've realized, for the better part of five months or so. Things political may have been a catalyst, but in some ways they're just a part - if an extremely accentuating part - of a larger funk.

Oh, now - don't worry, really; I'm fine. Marriage solid, health not too bad all told, dog well. Being so infinitely lucky, even as I mope I know where the next meal is coming from, and the weekly visit of a woman with much more to worry about than I keeps us from wallowing in filth. Brooding, though, seems even more self-indulgent when one is comparatively speaking so sheltered, so insulated from most forms of harm.  No, this current angsty bit isn't the kind of real trough that, once or twice before, has seized hold and not let go until dealt with severely (and medically). This, too, shall pass, but for the moment, it's really rather dreary. And there being no one cause, I think, only underscores the feeling: without any single thing to fix, it can just seem too exhausting to even start sorting things out. But one must try, and perhaps knowing that it's time to do so is the beginning of a pendulum swing.

Some of it is health, although on that front the news is actually quite good. With the second anniversary of the Big Cut behind us, the concomitant round of annual testing went with flying colors, that funny little business about the heart being in the wrong way 'round notwithstanding. The several minor irregularities on the EKG turn out to be entirely within the realm of the usual and not-to-be-worried about, which is good to know. Perhaps what's making me sad-ish about all of that is the realization that, even with the best of care and a good deal of hard work, the experience is not one that just goes away, ever. Once you have coronary artery disease, you have it for life, and that, I'm learning, is a feeling both oppressive and diminishing. I know I shouldn't complain (and so, complaining, along comes that most WASP of fellow-traveler feelings: guilt), but so it is. The aches and annoyances are vanishingly small in the grand scale of things, but they're there, and always will be, and medication schedules and dietary restrictions and a small-scale host of do's and don't are here to stay. Just knowing how lucky I am.... only takes us back 'round to the guilt. Oy.

And then there's work, which at this point is just dull. It's wounded my vanity that I've recently been passed over for several tempting opportunities; that itself has been a reminder of how spoiled I am, and how rare it's been that I've not just sailed into whatever harbor I hankered after.  In regard to things professional, "no" is not something I've heard that much of, and to start so late somehow only makes it sting the more. I'm within hailing distance now of retirement eligibility, which is a very good thing indeed, but I'm somehow quixotically disinclined just to tick off the months and days for another year or so. I need a challenge, and my current praiseworthy and not even vaguely taxing duties at the moment just aren't doing that. To paraphrase that sage of the last century, Olga, late of Sydney's of Park Avenue, "I just love a new task; it puts a girl on her mettle." My mettle, I fear, is getting rusty, and it contributes to the glum miasma that hovers like a bad odor in an ill-kept kitchen.

And in the background, too, is a haze of sorrows not fully digested. Darling Koko's death last November was a blow for both Mr. Muscato and me, and it's one that seems to resurrect itself now and then in the way that damp weather can remind one's bones of former injuries. Yesterday, tidying out a closet, I made the hard decision finally to throw away his bed, worn and battered and much loved. Off it went, creating a little needed space and an even greater feeling of emptiness. How dogs work their ways into our hearts and lives, and what a wrench it is to lose them...

Then, too, Mr. M. is still mourning his late mother, now gone more than a year, and I will acknowledge some feeling of sadness, not so much for the death of my father as for not really knowing what it would have been like to have one in the first place. That he and I had not a single thing in common, no shared frame of reference, somehow, from which to negotiate however tenuous a relationship, is itself both a simple fact and a sad thing, so hang it on the tree of melancholy that I'm currently tending more carefully than ever I have an actual growing thing.

And then, heaven help us: current events. I've realized that one unanticipated side effect of the endless stream of horridness we've seen since November has been the absolute shattering of the last remnants of my ability to concentrate, for any length of time, on almost anything at all. It's been yonks since I've sat down and lost myself in a book, or really enjoyed or even paid attention to a movie, or done anything, mentally, much more taxing than endlessly refreshing the headlines or seeing what new idiocies spew forth on Twitter or worse. I really fear we're in for whatever it is we're in the midst of for the long haul, and I'm going to have find a way to make it through, one that doesn't involve either simply giving up or surrendering wholly to an all-encompassing socio-political cynicism.

So here I am, limping along in what is turning into a several-months-long, mostly intermittent, but quite exhausting self-pity party. Not terribly attractive, we can all agree, and perhaps a phenomenon that a spate of decent weather and a little sturdiness of spirit can address, if not entirely cure. As is so often the case, I return to things of childhood:

"We," said Grandmother Muscato, "are never bored. How can one be bored when there is silver to be polished [or lunch to be made, or shelves to be tidied, or whatever task large or small was in her formidable sights]?"

"Don't just sit there. Do something!"

I shall, I suppose, have to decide just what thing that most needs done turns out to be, and do it. And I will, at some point.

But the moment - I'm with Miss Parker up there, up top. Is that not the gloomiest expression you've ever seen? That's despair, unvarnished; a despondency that doesn't lift and that, for her, colored - tainted, really - pretty much the last four decades of her life. I'm not that far gone, yet, and don't mean to be. In the end, old Dorothy had it right: you might as well live. But some days that takes some doing to get behind, and this is very much one of those. If you'll excuse me, I'm going to go sit and stare into the corner and sigh my little sigh.