Birthday Girl: The Queen of Hollywood 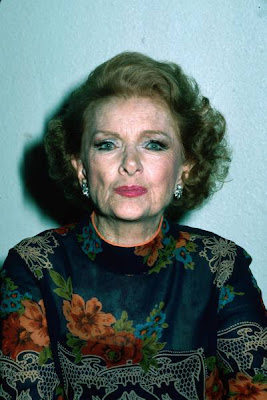 105 years ago today, a few miles outside Helena, Montana, smack dead-center in the heart of Broadwater County, a rancher and his wife had a bouncing baby girl. Who could have predicted that that flower of the prairie would grow up to be the most supremely gracious, self-assured, and self-aware lady of the American cinema?

She was, of course, Myrna Loy, and while the crown bestowed on her by Hollywood was really just something of another studio publicity ploy (the King, of course, was Gable), it fit her.

She only hit her stride as a star after a decade spent in what must have seemed an endless string of stinkers and unlikely ethnic parts. After putting in her time as Vamp, Lady in Waiting, Fifi, Chorus Girl, Inez Quartz, Girl in China, Yasmani, Nubi, Slave Girl, Lola Bland (!) and, God help her, Fah Lo See, Myrna was at long last rescued. MGM, having taken its sweet time, figured out what to do with her, which was: treasure her, glorify her, and, most of all, Americanize her - as if that took much doing.

And so she became Nora Charles; the glamourous leading lady who warmed up William Powell in all those Thin Man movies (and many others) and who came to epitomize a kind of ideal American lady. In a town not known for the quality, Myrna was serene. By the time she moved on to television and the stage, as Hollywood's onetime studio goddess eventually did, simply casting her was a kind of shorthand, a mark of quality. Myrna Loy was, remained, and, I suspect, always will be a class act.

We see Miss Loy here a few decades after the height of her reign, but in my opinion she still looked damn good. I love that fiesty Old Dame look, one too little seen anymore in this taut and frozen-visaged era...

*Apollonia fun-fact: it was in fact her eponymous sometime girl group Apollonia 6 that first sang, on their equally eponymous first album, "Manic Monday", ages, more or less, before the Bangles. Who knew?
Posted by Muscato at 1:48 PM 20 comments: