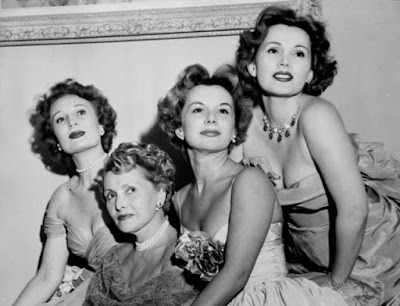 And so we live in a world suddenly Gaborless. It seems a fitting ending to this wretched, dreary year.

St. Zsa Zsa's long-delayed departure for the sparkling shores of Fabulon, I think we might agree, is the loveliest Christmas present that could have been granted the long-suffering lady. Any transgressions of her silly, ravishing, ever-engrossing life have more than been offset by what was, by any measure, a textbook example of that tabloid favorite, the Sad Last Days. In her case, years, and long and weary ones I'm sure they were.

I refuse to think too much of that, of the pitiable husk and her ersatz Krautnobility of a husband. No; I think it far better to dwell on the days and decades when she was Mama Jolie's pride and joy, the head duckling, alongside earnest Eva and sensible - comparatively - Magda, of a prodigious brood of beauties and female buccaneers. They made it a long way from Budapest, all of them, with detours that led from Istanbul to Hollywood and far beyond. They were never the best at anything at all except being themselves, but that was more than enough to keep them in headlines and diamonds. And in the world they created for themselves, who could ask for anything more?

The shadows gather so early now, she thinks, the darkness falling while the tea things linger still on the low table near her exquisite Directoire chaise longue. The tall windows don't seem to do enough, any longer, to keep out the cold. The girl will be in soon enough to pull the curtains, she supposes, but why does the world feel so chill, so gray? It seems, she ponders, mind wandering, the clouds are gathering, clouds she's seen before and dreads. The things one values - wit and laughter, a certain wry cosmopolitan finesse, a solid foundation of common sense - all seem to matter less and less. And as for politics? She sighs and turns her head, waiting for the sound of the girl, come to take the tray. Still the days go on and on.

Memory, though, so different from time, proves ever more fickle, more like the shadows of the bare branches switching in the winter wind outside against the dark. Hearing this morning the fuss on the radio - the World Service, at least, still more or less blessedly unchanged in its reliability - she had to think a moment or so even to recall the name. Ah yes, of course - an image of some otherwise forgotten evening out, the sudden stir, the murmuring of half-amused, half-impressed dinner guests or nightclub patrons (was it the Warners' or dear George Cukor's, or out some night at Chasen's, Ciro's, El Maroc?), and then the vision, glittering and just a shade too loud, wafting through a kind of self-imposed soft-focus made of every conceivable skill of all the arts known to women and their crafty allies. Diamonds - Tiffany, perhaps, although only Mama Jolie knows for sure; Schiaparelli, possibly, although a clever woman always knows a little seamstress somewhere who can do the trick; and clouds and clouds of things invaluable: furs, perfumes, and endless self-regard. One suddenly felt so simple, or as simple as one could in a Jacques Heim gown and a picture in the works at MGM...

And now she too is gone. Reaching for the book, she wonders if it's a name that's even there; surely few women made more play out of less work than that one, and most of it so ridiculous. Still, it's not always the art so much as the outcome, and not everything has to be Shakespeare or Molière (or even Margaret Mitchell...); she knows that as well as any other long survivor of the game. But there it is, three little words (all the matrimonial suffixes counting in the end for just as little as they did in life). She reaches for her pen, there in the welter of papers and books and useful things beside the tea tray, and scores it through.

Even in Paris, in a fine old house in a fine old neighborhood, at her great age, the nights are colder. The shadows gather, and all the losses with them, the somber and the silly ones, adventurers and pioneers and mad ones passing, going, gone. In this low world, a pretty woman with a clever tongue and an ambitious mother seems like something from another age. Well, it may not have been art, but so much of it was, she thinks, approvingly and ruefully, great fun. And surely that's a quality no one should begrudge the world?
Posted by Muscato at 12:17 PM