By the Beautiful Sea 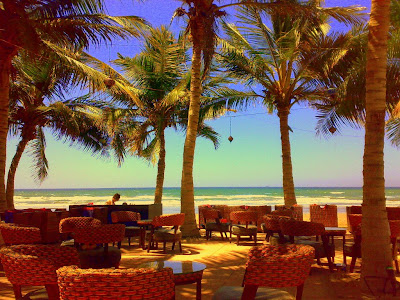 On Thursdays, I often like to come up with some slice-of-life moment, a chance to give Koko his moment in the spotlight or to muse fondly on Mr. Muscato. The fact is, though, that our lives are far from packed with incident: we work, we grocery-shop, we spend a significant part of our weekends sleeping in, and, as you can gather from the snap, these days we are taking advantage of an usually temperate April to continue lazing about near the water.

I suppose I could rave about the nearly completed revamp of our favorite supermarket, one that has added such (by local ken) exotic touches as signs at the end of each aisle describing the goods found therein (and more or less accurately, too - there's the wonder). And it stocks maple syrup (although still, maddeningly, not sage - a spice too far, perhaps, in a nation obsessed with cumin and cardamom).

This last I find especially dread-inducing, since whenever there is anything particularly vivid at the cinema set in the West, I know I will have at least one solemn conversation with a local colleague, friend, or other acquaintance who has taken it on as yet another facet of the Gospel Truth He Knows About America. "If your country is so good," (I can just hear it now), "what about all those slaughtered co-eds at the lake house?"

But I think I'll just leave you with the photo; a seaside café on a perfect weekend morning. The dog adores going, as he usually gets scraps; we adore going, as the juice is very good; and our friend The Artist adores meeting us there, as the place tends to act as a kind of preview for the tourists and other short-stay visitors who will likely be turning up in our local pub (another usual weekend destination) just ten or so hours later. If nothing else, it provides him the chance to see them in full light, which is probably very wise.
Posted by Muscato at 9:39 AM