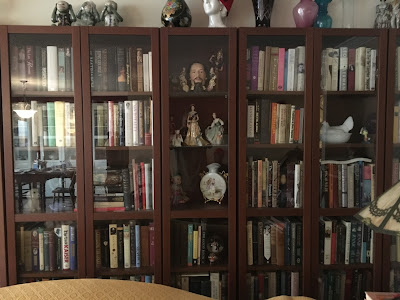 Over in her curious corner of the cyberverse*, the esteemed Mistress MJ has requested a glimpse at her Dear Readers' bookshelves, and I feel compelled to oblige.

Herewith the literary corner of our little home, the humble Apartment Muscato that has replaced the cherished Villas of yesteryear. This, I should add, is only the center section of an expanse of shelves that continues on in both directions. In front you see the distinctive hump of Great Grandmother Muscato's prized camelback Queen Anne sofa, while the tops of the shelves will give you a sense of our not particularly minimalist décor.  As for the contents of the shelves themselves, the various bibelots aside, the left side is largely devoted to royal biographies, while various chronicles of the entertainment world dominate the right. Truly discerning Café Regulars may even be able to spot my treasured, dogeared copy of Mr. Leo Lerman's monumental memoir-cum-journals, The Grand Surprise. Among other books that regularly appear here, I suppose I should note that the Lucia anthology and the Pyms are off-camera to the left, with fiction and poetry, while the bulk of dear Mr. Mordden's mordant observations on the Business of Show are similarly unseen, to the right.

And the bibelots themselves? It's a mixed lot. Top shelf center, one might make out the head of Mr. Charles Dickens, in the form of a two-handled toby mug, just a tiny part of Mother Muscato's vast holdings of Dickensiana (something that I've discovered is a peculiarly if not spectacularly un-resellable sort of passion to collect), while centering the second row down is a jubilee figure of HM The Queen, picked up in a wild moment of exuberance from the Harrods at Heathrow because, like so much in the world of what I've come to call regrettabilia, It Seemed Like A Good Idea At The Time.

The Nosy Parkers among you can feast on the reflection in the distance of our at the moment startingly untidy dining table and the prospect in the distance of the china cupboards.  As noted, we don't really go in for minimal in these parts.

I've actually pared down the books a great deal in recent years, starting with almost all the smaller paperbacks and most things no longer in copyright (and therefore easily available digitally). Because of our peripatetic life, I've also been buying most new books online, including virtually everything I've read in the past three years. Still, I do love the old books and doubt I'll cut all that much further although a part of me wonders if I really will ever reread all those Margaret Drabbles, not to mention the parade of coffee table books that anchor the bottom shelves of all those cases - never in a hundred years will I have enough coffee tables to display them, and do I really need four books on Great Gardens of Europe, just because Grandmother Muscato had them?

Things literary have been much on my mind these past weeks, as we've been traveling and, more recently, as I've been invaliding at home. One odd side-effect of all the woeful - oh, let's be honest, vile - goings-on in the world has been, I've discovered, an almost entire inability to focus on anything for more than a few minutes at a time. As a result, while I've been reading a good deal - nearly non-stop, in fact - none of it has been anything of any substance. I'm working my way, at the moment, through Richard Ellman's praiseworthy biography of Oscar Wilde, but in such short snippets that I have to keep going back and patching myself back into the narrative. No, it's mostly headlines and opeds, endless re-checks of Twitter and updates of the Guardian and the Post and the NYTimes - a mostly fruitless quest to see if possibly, just possibly, something not appalling has happened in the last 20 minutes. It rarely has.  As we head into a welcome (although after five week's of leave to date, I really oughtn't complain) three-day weekend, I'm working on a resolution to settle down and do something useful - really read a chapter, or watch a movie, or just nap with the dog. Even so, I have a feeling that the hand will creep, as of its own volition, slowly to the phone or the tablet, just to get a fix of dread and outrage.

In happier news, I do have one ray of sunshine: as noted previously, this week marks the second anniversary of my little cardiac unpleasantness, and so this morning I toddled off to the see the Dishy Cardiologist. He pronounced himself entirely satisfied with my state of being. We'll see what tales the blood tests tell, but the muscle itself is in fine fettle, the old BP is just where one wants it to be, and next week I'll have what I'm sure will be an enchanting stress test, as the DC wants to see just how far things can go, heartwise; it seems he wants me to start jogging. God help me.

So here we are. I'll happily entertain any questions or thoughts generated by this little glimpse chez nous, and I hope you'll enjoy a President's Day weekend spent thinking of better exemplars of the genre than that so much on display these days. I'm holding thoughts of T. Roosevelt and a certain B. Obama, two of my favorites, close to my heart. We've seen better days, and as Oscar reminds us, we may be in the gutter, but some of us - even now - are looking at the stars.

* A link not recommended for the faint of heart.
Posted by Muscato at 3:10 PM