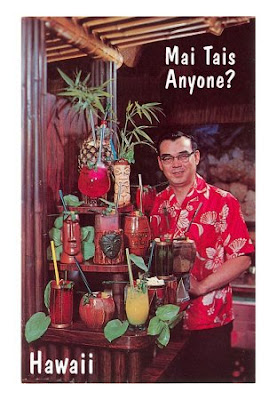 The restoration, more or less, of our connectivity to the great wide world calls for a cocktail, so I've asked Alf the Bartender to whip up something in a tiki vein. I do think he looks cute in his little Hawaiian shirt, don't you?

Actually, this past weekend marked another visit to that local den of polynesio-iniquity, Trader Vic's, but we were very well-behaved, mostly because we were already half-stunned by a day of sun, sand, and mimosas on the beach. We decided, Mr. Muscato and I, that this was very likely our last such excursion for the next few months, as the heat is definitely starting to build, and the sand is getting a little toasty for the delicate feet of Koko. And me, too, for that matter.

So there was, even as we frolicked, an oddly autumnal feeling about the day, leavened only by the distinctly decorative presence, among the usual suspects, of The Chocolatier, a sporty Lebanese ephebe, the kind of dear young creature whose body, in his decoratively tiny maillot, appears to be made entirely of more or less contiguous erogenous zones. Musical, as the Countess de Lave might have said, had she been there.

And had she been there, she would likely have been dressed more or less as I was, although I suppose with more fringe - I may adore living in this part of the world, but I'm still very much of the pale persuasion, with a distinct tendency toward the pinkish after even a little while under this tropic sun...
Posted by Muscato at 1:55 PM