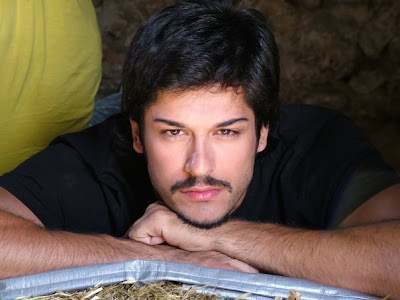 Why not start out 2013 appreciating a little beauty?  Here at the Café, regulars will know, we have a bit of a thing for tall, dark, and handsome, on the order of Bollywood's Mr. John Abraham, fetching Mr. Upen Patel, sometime Mr. Egypt Tarek Naguib, and such Hollywood staples past and present as Messrs. Kline and Gable.

Here we have a new addition to our stable, as it were - Turkish star Burak Özçivit (don't ask me - I haven't the foggiest on how to pronounce it; any and all suggestions welcome). He's popped up on the radar of late because Mr. Muscato has become addicted to a new soap opera on local television; it's an Arabic-dubbed version of the blockbuster series Muhteşem Yüzyıl (The Magnificent Century, known in Arabic as Hareem al Sultan, meaning The Sultan's Harem).  It's a sprawling costume drama of the life and times of Suleiman the Magnificent, and it's basically Dynasty in turbans and fab Ottoman court costumes. 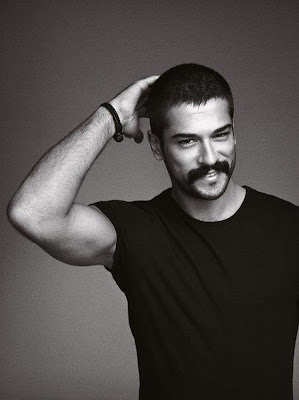 Among other things, the period setting requires the male half of the cast to sport an alluring range of facial hair, and it's this that has really brought our Mr. Özçivit into his own. He's been around for a while, it seems, as one of Turkey's leading male models and a dabbling actor, but the addition of the moustache seen here has transformed a pretty but rather bland young man into... something more special. 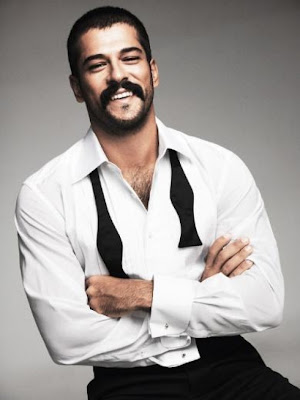 Sadly, Turkish stars don't have the pleasing tendency of their Bollywood brothers to drop their shirts at the least provocation, but Mr. O. has the charisma to make fully dressed seem almost as alluring as the alternative.

In any case, between the distractions offered by the moustache and all its counterparts on the other actors and the splendid outfits (the ladies of the harem swan about dressed in massive velvet gowns and quantities of jewelry, while the men run to embroidered vests and inventive headgear), I'm enjoying Hareem al Sultan almost enough to ignore the woeful dubbing, which is very much on the level of that seen in Mr. Woody Allen's What's Up, Tiger Lily? - lots of bits in which voices float over faces that stopped speaking moments ago, and/or great stretches of frantic acting dubbed with something along the lines of "Yes, Your Highness."

It's all very fraught, with a level of slapping and storming in and out of palace chambers that would do Aaron Spelling proud.  If only there were more scenes set poolside at Topkapi...
Posted by Muscato at 1:50 PM