In a Perfect World 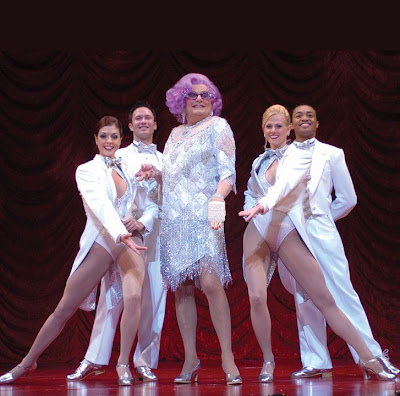 Dame Edna is Carlotta Campion!
Talk around the Café recently turned, as things are wont to do in these parts, from an appreciative remark about that Antipodean Girl With Something Extra, the one and only Dame Edna Everage, to the Broadway favorite of an elite subset of fans, the extraordinary creation that is Follies.

This gave rise, logically enough, to the idea of Dame Edna actually in the show - followed almost immediately by the creation, by deeply and importantly talented Café regular Bill, of the following adaptation of the piece's big number. Were the Dame to take my advice, she would immediately make it her signature song.

I reproduce this little piece of genius here, in genuine admiration and no small glee, with the author's permission.

Imagine the setting - the lights dimming as our lilac-tressed diva moves center stage; she hits her spot, and:

Vegemite sammies in Moonee Ponds
Watched while Madge Alsop sold war bonds
In the Depression was I depressed?
Nowhere near -
I bagged Sir Norman Everage
And I'm here!

I got through Mel G's drunken blow,
Bridesmaid Madge Alsop,
Russell Crowe -
Had heebie-jeebies for dear Kylie Minogue;
I got through Cruise and Kidman,
And I’m here!

Been called an Outback Aussie Fool,
got through it out back by my pool
I should've opened an acting school,
…and a bar -
Still someone said, "GigaStar",
so I'm here!

First you're an Aussie housewife name,
Then Kenny's mother,
then The Dame
Then you career from career to career
I’ll write my gorgeous memoirs,
and I'm here!

I've gotten through, "Hey, Edna, aren't you spooky?
Wow, what a looker you are!"
Or better yet, "Sorry, it's just kind of spooky
To meet such a huge GigaStar!"

I've run the gamut, ‘cause I care
Three cheers and quick sticks,
Where is Cher?
I got through all of last year,
and I'm here!

Possums, at least I was there,
and I'm here
Look who's here,
I'm still here!

And fade to black as the audience goes wild.

Somewhere, I'd like to think, Yvonne de Carlo, Eartha Kitt, and Ann Miller are having a right chuckle over their cocktails.
Posted by Muscato at 2:36 PM