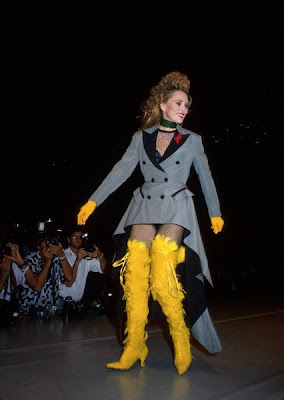 This bemusing 1992 snap of Miss Faye Dunaway - who has apparently stumbled off the set of an Adam Ant tribute video onto a catwalk - is, if nothing else, proof positive that the 80s lingered on long after its sell-by date.

Dunaway puzzles me. For a decade or so she was the Biggest Star in the World. We see her here about halfway through the long going-wrong that started with Mommie Dearest (or was it The Champ, three years earlier?) and has been going on for rising thirty years. I looked her up just now and was discouraged to discover that in one of her last released films, The Gene Generation, she was fourth-billed in a Bai Ling picture, and that in another she was a one-armed cop in something described as "a rockabilly zombie comedy."

It is, somehow, the longest slow-motion career unravelling I can think of, one that makes (to compare her to the inevitable) Strait-Jacket look like a smart career choice, Berserk the work of an artist in her prime, or Trog a benign valedictory. It can't (just) be the money; it's hard to imagine that a Polish children's fantasy, a Troma thriller, or a cameo in a straight-to-video Andy Dick picture (all actually recent credits) do all that much for even the most cash-strapped movie queen. Is she simply unable to say no?

Perhaps it can all be blamed on these boots. But I have a feeling it's what's in them that's the problem...
Posted by Muscato at 11:15 PM