Birthday Girl: The May Queen

On this day in 1867, in a grace-and-favour apartment at Kensington Palace, a little girl was born to the vast Princess Mary Adelaide, a granddaughter of George III, and her rather musical-comedy looking little husband, Prince Franz of Teck. 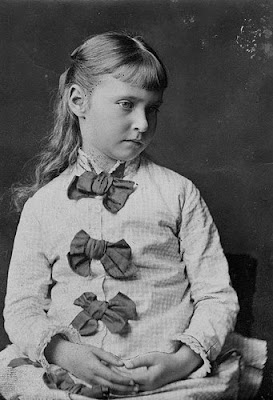 The Tecks were an improvident couple, and their daughter grew into a solemn and serious girl who was shuttled from house to house as her parents (who eventually more or less fled to Italy) avoided creditors and increasingly irritated relatives, including Mary Adelaide's formidable cousin, Queen Victoria. 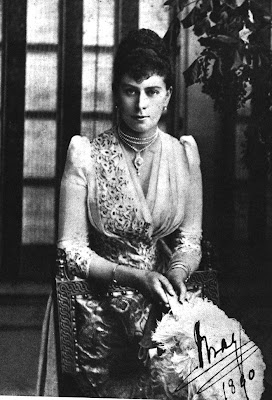 Despite this less-than-ideal upbringing, the little girl - called May, after her birth month, and certainly less of a mouthful than her given names, Victoria Mary Augusta Louise Olga Pauline Claudine Agnes - grew into a serious, intelligent, and not at all unattractive young princess.

She entered the Royal Marriage Mart not once, but twice, having lost her first fiancé, the distinctly unpromising Duke of Clarence (the heir to the heir) to flu before being snatched up by the Duke of York (his brother's replacement in the succession as well as at the altar).

And so she lived happily ever after. 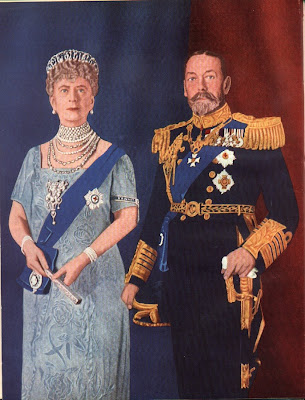 She became the stately creature known as Queen Mary, possessor of the most fabulous collection of jewellery and bibelots in the world, seen here in this rather alarming hand-colored portrait with her husband (who seems genuinely to have been the love of her life, at least after diamond-and-pearl stomachers), George V. 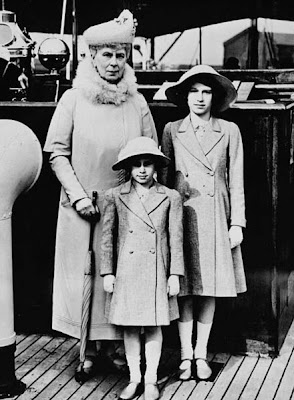 Although she shuffled off this mortal coil, at a venerable age and secure in the adoration of her people, nearly 60 years ago, Queen Mary left her mark on the world we live in today, for she was a formative influence in the life of the Queen who is still very much with us. The Queen used to take the Princesses Elizabeth and Margaret Rose on little educational outings, which were, one reads, as much looked forward to by the former as they were dreaded by the latter.

So, on her 143rd birthday, here's to May of Teck, the pauper-princess turned Empress of India. She was a good old girl and rock of stability through all her long life, as implacably Victorian on the day she died as she had been on the fine May morning that brought her into this world.
Posted by Muscato at 11:22 PM