Queen of a Far Country 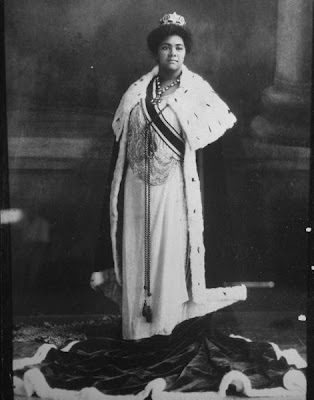 This regal lady is none other than Sālote Mafile‘o Pilolevu Tupou III, Queen of Tonga, and why she's on my mind today I really couldn't say.

She's one of those colorful figures of recent history about whom one reads something once, files it away, and finds it floating occasionally to the surface ever thereafter. 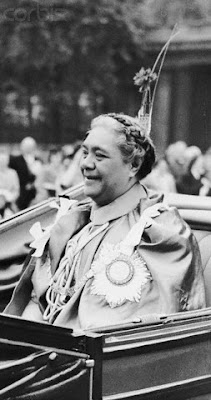 Queen Salote is probably most remembered today for her appearance at the coronation of her fellow queen regnant Elizabeth II in 1953. Those who were there remember her for her extrardinary presence - at something over 6' 3" and reputedly topping 300 pounds, she was hard to miss in a procession - and for being unfazed by the London weather that sent showers squalling over the royal parade. 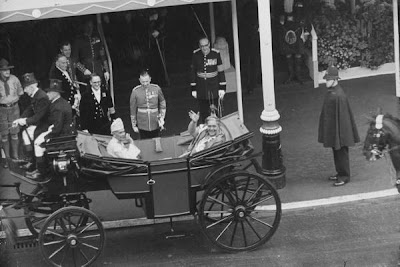 Those who are anecdotally minded, however, are more likely to remember her, and her participation in the historic event, for a possibly apocryphal remark by dear Mr. Noël Coward.

He was one of a number of people, including Miss Gertrude Lawrence, who were watching the procession from a comfortable balcony, and he was proving invaluable to his companions in identifying the myriad notables rolling by.

"The lady in the next carriage," said Mr. Coward, "is the Queen of Tonga."

"But who," asks Miss Lawrence, "is that with her?"

The gentleman in question - undeniably dwarfed by his vast and affable carriage-mate - was in fact the Sultan of Kelantan, who would most certainly be remembered for nothing at all had he simply been put in a landau with an ordinary royal. 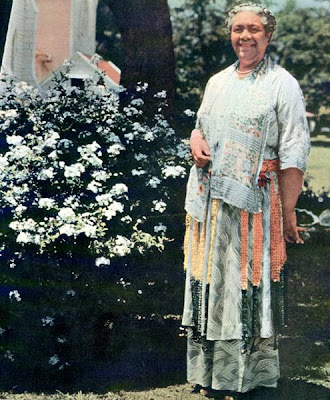 Her coronation-fame aside, Queen Salote seems to have been a truly lovely and remarkable person. Her long reign - from the end of the First World War right into the mid-sixties - is considered a kind of Tongan golden age, and it's nice to think she enjoyed so many decades of appreciation by her people. She was a musician, poet, and patroness of many worthy endeavors, and amid it all had time to give birth to her even vaster successor, King Tāufa‘āhau Tupou IV , who only just recently shuffled off this mortal coil after a rather more fretful reign. 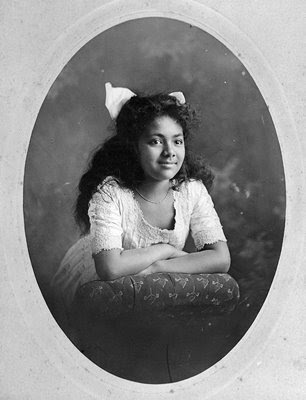 But before all that she was a sweet-faced young girl in Edwardian dress, and isn't it nice, seeing what an innocent young thing she seems to be, to know that it turned out so well?
Posted by Muscato at 8:27 AM