Well, we're home, and in one piece, or rather in as many pieces as we left and no more, which is a good thing, you see, because en route out of Dubai we had a little accident. Not really serious - the Muscato Mobile is disfigured and humiliated, but more or less driveable, if carefully.

The culprit who rammed us was a gentleman who had chosen, on a fine Saturday morning, to become drunk as a lord before twelve noon and go out for a spin in order to catch up, it seems, on his telephoning and chain smoking. It's some measure of how completely schnockered the poor loser was that he is Emirati, we're not, and still the police had no compunction in immediately declaring him at fault.

But before all that, our trip was everything a naughty minibreak should be. 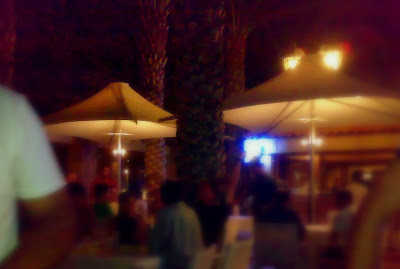 We had a lovely evening at the nitespot pictured (and discreetly blurred), a regular haunt of the city's confirmed bachelors. It was a gloriously not-broiling evening, and we held court under the palms, Mr. Muscato and I, with all sorts of chums and acquaintances.

About half our friends seem to be doing better than ever, and the other half are either moving in with them or heading back to their countries of origin. Whatever the economic situation, though, the boys were out in force and it was a pleasure to see them. 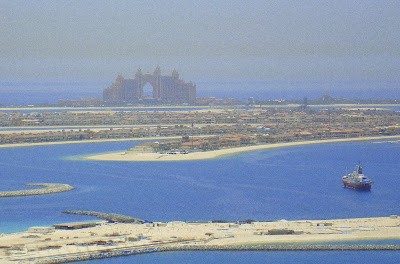 The view from our lodgings did finally appear from the haze, and as promised it included, in the distance, the city's much-vaunted new attraction, The Atlantis. You'll get an idea of the size of the thing by knowing that in this picture it's about ten kilometers away.

Having never been on the Palm (whose villa-choked fronds are in the foreground), we decided after brunch yesterday to motor out in the company of The Hotelier and his visiting friend, whom I suppose we must refer to as The London Hotelier.

And now at least we can say we've been, and the best thing is we need never, ever return. 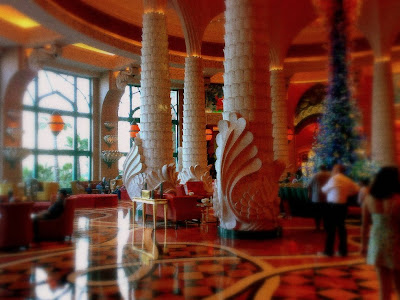 The décor is Disney on steroids, executed with the kind of ponderous solemnity associated more with the works of Albert Speer than a holiday resort. American kitschmeister Morris Lapidus described his style as "an Architecture of Joy"; this is the infinitely more dreary "Architecture of Mandatory Fun." 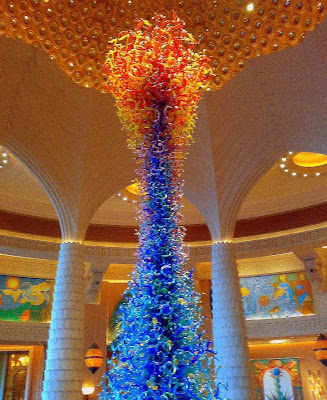 The place was overrun with tourists - guests and visitors alike - of a seemingly infinite number of nationalities, each and every one of whom would have immediately, once upon a time, been classified by Society Grandmother Muscato as "not quite our kind, darling." Harsh, but true, true, true.

Getting almost as much attention as the massive aquariums, stuffed with tropical sealife of all kinds, or the dazzlingly horrid shops (who do they really expect to buy a yellow diamond and black pearl parure complete with tiara in a place like that?) was the lobby's pièce de résistance, a sculpture by Dale Chiluly (and what upscale tacky resort is complete without one of those?). The Hotelier describes it as "a four-story high closeup of a very unhappy nerve," and that about sums it up.

We repaired our own shattered nerves with a sundowner evening in the garden of friends of The Hotelier, who live in a (comparatively) old and (comparatively) tranquil neighborhood, in a wonderful small villa surrounded by bougainvillea. It felt like one of the places I remember from West Africa, making it all the more surreal to look up and see, glittering in the distance, the misbegotten towers of Sheikh Zayed Road.

And now, replete with three days of rich food and good company, we're back in our own little house. Koko was very pleased to see us, as you can imagine, and while everyone on the other side of the Atlantic heads into the Memorial Day weekend, we've finished ours and go back, such as it is, to reality.
Posted by Muscato at 2:27 PM