Every once in a while, I'll realize that there is more to Hollywood than perhaps I'll ever learn. It's nice, I suppose, to know that there are still some surprises.

Today, for example, I was channel-flipping (scandalously home mid-afternoon, touch of the tummy darlings, very boring) and came across the opening credits to Ann Sheridan's Norah Bayes biopic Shine On Harvest Moon.

There were four names above the title (typical Warner's egalitarianism - there were hardly ever more than two, max, so featured, say, at MGM). Sheridan, leading men Dennis Morgan and Jack Carson, and a name that made me stop and think: who?

Famous enough in 1944 to be headlining an mid-upper kind of picture at a major studio, and today - if I don't register her, I don't think it's an exaggeration to say - pretty much forgotten.

Well, it turns out she had a nifty enough little career - lots of stage work, a short stint in Westerns at Republic, then a string of Warners pictures in the early 40s (I'd forgotten she has a nice supporting role in Yankee Doodle Dandy, for example, and was the female lead in The Desert Song). She's seen above in a Life snap from 1938 modelling a daring midriff number.

She played opposite Bogart in something called The Big Shot, playing a character called Lorna Fleming (a perfect Bogart moll name) and looking suitably noir. 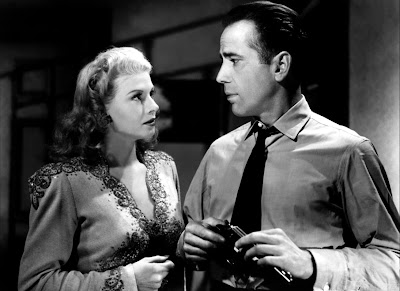 Then it was off to London when the War ended; she made a couple of pictures there, went back on stage, and retired. She died in 2004, at 91, after four short marriages and one long one (to a Lockheed executive - good for her!).

And that's really all there is to say. She's one of those names that, somehow, failed to register - one of those workmanlike leading ladies who did well enough but no better. She had something, but not that Little Something Extra that Ellen Terry said defines stardom.

Even so, she looks awfully good in this poster for the French release of Big Shot, no? 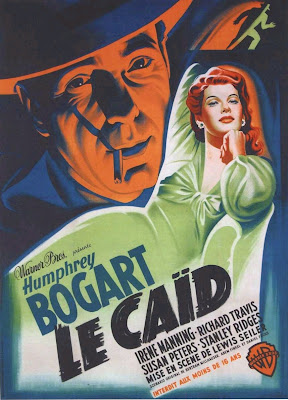 So here's to Irene Manning, operetta leading lady, noir dame, San Francisco matron. She turns up, every inch that final incarnation, in a funny little time capsule of a clip on YouTube, making a surprise appearance during a 1981 PBS pledge-week broadcast of Yankee Doodle Dandy.

If nothing else, it's a reminder, based on the phone volunteers in the background, that people were wearing 70s outfits well after their sell-by date...