(Not) at the Movies

Our little capital's dilatory film calendar means we've not yet had the pleasure of not seeing Valkyrie, which despite its less-horrendous-than-expected reviews still seems like a must-miss to me. It does present the opportunity, though, to make a wholehearted book recommendation.

If you want to find out how the von Stauffenberg plot to kill Hitler was experienced by those involved - if, in fact, you want a matchless account from within of life as a foreigner trapped in Nazi Berlin - you can do no better than read Berlin Diaries, the extraordinary memoirs of Princess Marie Vassiltchikov. She was a semi-impoverished White Russian who found herself stuck in Germany when the start of the Second War cut her off from her family and forced her to find work in the Nazi capital. The book starts just as things are getting under way, with a glimpse into the increasingly surreal life of a circle of friends trying to preserve some shreds of normality. 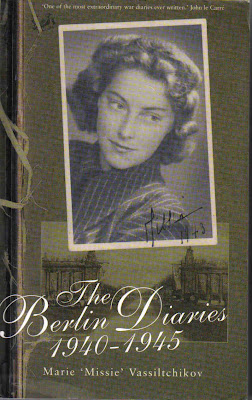 It ends with the War, in 1945, with the Princess reduced to stumbling in rags across a half-bombed trainyard en route to finding whomever of her family she thinks may have survived. In between, one experiences everything along with the enormously appealing writer, from the excitement of an unexected package of food to horror at the destruction of familiar landmarks (she heads out one fine day to lunch at the posh Hotel Adlon only to find it in flames).

She worked with and came to admire enormously a number of the July 20 plotters, and she was involved in a series of daring attempts to get information on their whereabouts and even provide some comfort to them before most were executed.

Why they haven't made a movie of this book I can't say, except that it really wouldn't have room for Culty McCult and would have to feature a range of smart, funny, tough women characters.
Posted by Muscato at 1:07 PM