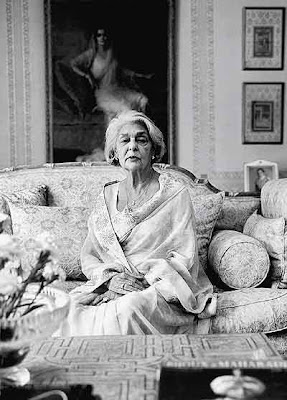 Sad news from the Subcontinent; I don't know how I missed this one, but earlier this week one of my favorite people returned to Fabulon. The glamourous Gayatri Devi, Rajamata of Jaipur, former Maharani of the same state, born a princess of Cooch Behar, has died at 90.

I would be hard pressed to do better than the New York Times obituary in conveying the nature of her allure. It quotes a 1966 report in which their reporter may have found himself a shade too transfixed, writing of her attendance at an official briefing:

The meeting had begun when the Maharani made her entry, giving everyone a whiff of expensive French perfume. She was dressed in a turquoise-blue chiffon sari with silver sequins sparkling like stars on a moonless night. She looked around with her large almond eyes. Everyone stood up. As Hillaire Belloc once described someone, ‘her face was like the king’s command when all the swords are drawn.'

Yowzah! Not many left in this low world who can have that kind of effect on a hard-boiled political journalist, no?
Posted by Muscato at 6:57 AM