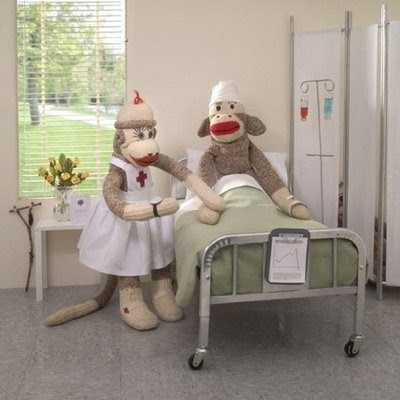 Oh, I know it seems like just yesterday I was complaining about the 'flu, and I don't really want to give the impression that we live in a constant haze of ill-health, but...

For the moment, we kind of do. Today we got to spend several charming hours in the local hospital while poor Mr. Muscato underwent an unpleasant (but don't worry, not a very unpleasant, and you know what I mean, don't you, all of you gents over 40?) kind of test that required significant anesthesia.

Sitting in the hospital room while he was off being worked over, I thought, and not for the first time, that these visits are like little glimpses into the future. At some point, we will probably again be doing something rather like this, and it won't be trivial. Given that he is, in Mr. Peenee's immortal words drawn from a far more serious situation, "the center of my universe, the joy of my life, the cream in my coffee," it all felt rather grave even though it was really, as they used to say on those civil-defense PSAs, just a test.

When they rolled him back in, accompanied by a beaming doctor who gave every impression of seeing through the "just a friend" ruse that went over with the nurses and was fine with it, it was like clouds parting. Within half-and-hour, groggy but game, he was working his way through the hospital's rather dire "chicken a la Italian" and well on his way to being deeply grumpy about having to have an IV.

Oh - and the sock monkeys? Sorry. I know I don't usually do cutesy, but I've always had a soft spot for the damn things. My Great Aunt Edna used to make them. Even she never thought of dioramas, though, although I tremble to think what she could have done had she done so.
Posted by Muscato at 12:36 PM