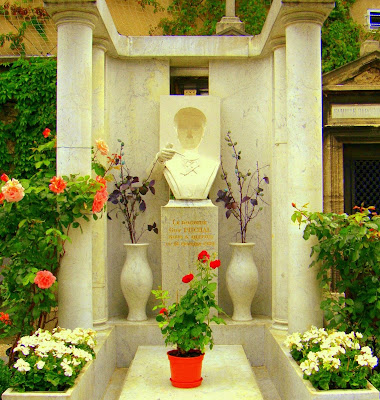 Yet another travel snap, from the cemetery in Montmartre. This rather arresting monument is just down the way from Dalida's and was, it seems, the inspiration of a Dr. Pitchal. My money is on his having been a Magritte fan.

I love Google! Writing this, I thought of looking him up. Well, it turns out that Dr. Pitchal's widow has written up their great affair - and she claims to have been Dalida's best friend on top of that. She sounds like rather a character herself:

"Jacqueline's life is rich in adventures; whether at the court of the Shah of Iran, or in Los Angeles, Palm Beach or Dubai. From the ministrations of a healer in Marrakesh which almost left her blind to her kidnapping and ransom in Saint Tropez in 1982. Jacqueline Pitchal has truly lived many lives in one."

And to think I thought Mr. Muscato and I had a colorful life. You really need to read more about her; it all made me need a nap. But not as long a one as that on which Dr. Pitchal has embarked...
Posted by Muscato at 10:06 AM