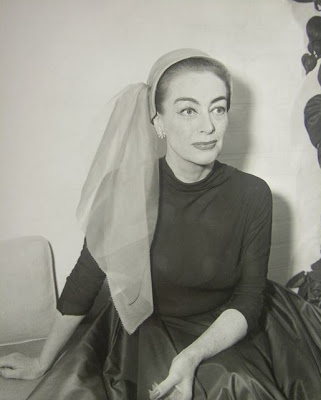 Here - just in case you weren't sure - we have film star Joan Crawford. In a photograph taken in 1956.

Looking at this photograph, keep in mind that there are still ten years or more left in which the worldwide media machine will, marveling, natter on with some level of sincerity about her "agelessness", her "enduring youthfulness."

Today, 51 is for pikers. At 51, actresses are expected to look pretty much like they did at 30. Michelle Pfeiffer is 51. "Youthful", here in the 21st century, is, give or take a couple of years, 70. Cher is youthful. Tina Turner is ageless. People make fun of Liza Minnelli for a certain amount of visible aging, and at 63, she could easily be 15 years younger than Joan, who here at least by 2009 standards could pass for 75.

What do you suppose has changed? Plastic surgery, of course, and all the routine little maintenance peels and pokes and plumpings recent advances have made possible. The overall quantities of nicotine and alcohol, both factors in speeding up the aging process, are likely down for today's average sexageneradiva. I can't help thinking, though, that an awful lot of it is attitude. Age, in Joan's world, was a subject for dread, for ignoring; today, we haven't quite got around to celebrating real aging, but we're at least entirely happy to welcome the idea that it can be almost indefinitely postponed.

Oh - yes, the hat. Oh, dear. I've seen Joan wearing some truly horrid headgear in the past, but this is the first I can recall that actually looks as if it were trying to escape ("maybe if I'm quiet enough, I can just slip off the back of her head and rappel down the shoulder veil-first..."). It's not so much a hat as some designer's idea of a punishment. Punishment, perhaps, for growing older, faster than she was meant to.

Looking into her eyes, you realize the saddest thing: whoever else was taken in by the legend of her eternal youth (or rather, that very different concept, youthfulness), Joan is not among them. She knows, no one more, how much work goes into being Joan Crawford. Even she wonders, from time to time, if it's worth it.
Posted by Muscato at 2:10 PM