So we headed once more this past weekend out to the One Rial Store, Mr. Muscato and I, accompanied by our friends The Shopaholics.

Generally speaking, we're perfectly happy making only the occasional foray into our beloved capital's limited retail scene, but these two live for it. What makes them tolerable is that they are every bit as giddily happy at the One Rial as they are at more shall we say upscale outlets, and they are quite content to entertain themselves, dragging Mr. Muscato along, in any setting involving merchandise, meaning I can potter about on my own.

As usual, I had my eye out for treasures, and found a few. For example: 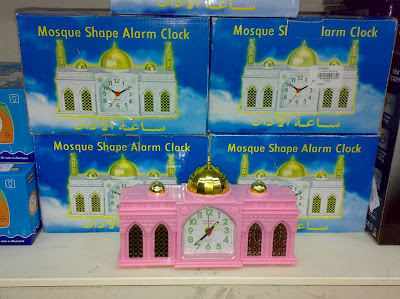 Isn't this an absolute must? I've seen them now and then in other shops, although never in quite so tawdry a pink. It seems to be a prerequisite, by the bye, for Mosque Shape Alarm Clocks™ that they come, however miniscule the object or price, with the kind of speaker system most often seen at heavy metal concerts. 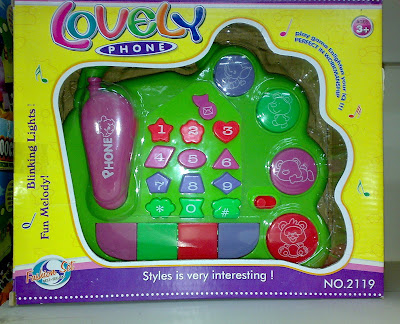 The toy aisle never fails to divert, and this expedition was no exception. Who could resist, for instance, a play phone that states proudly it is "perfect in workmanship"? No mere shoddy array of plastic this - it's Lovely! 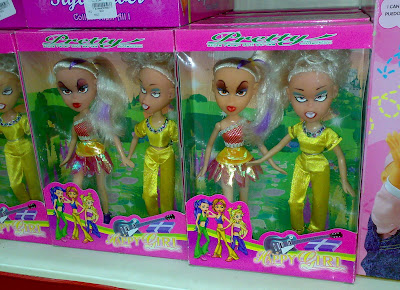 Nearby, these dyspeptic junior harlots gave me a good case of the shudders. If they ever remake that Karen Black picture where the bloodsucking dolls come to life and nibble her to death, I think we've found our stars, no?

Oh, and speaking of bloodsucking: 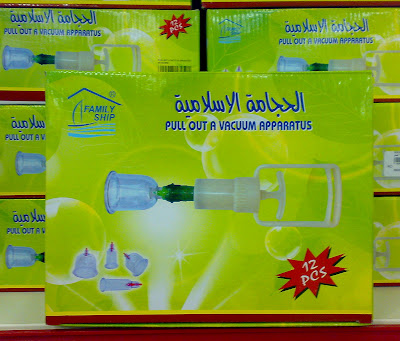 Whatever else you might gather from the tagline - and for the record, no, you pull out a vacuum apparatus, thank you very much - on offer was not one but two handy-dandy cupping systems, perfect for raising therapeutic welts. 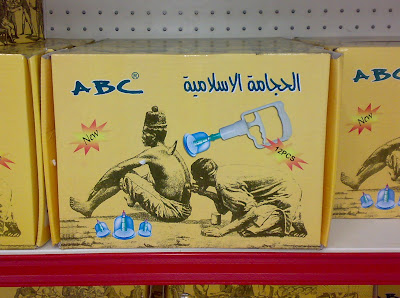 Whether this second set is specially to designed either to cause or to cure bizarre cone-shaped growths on the shoulderblades, I hardly dare speculate.

Apparently it's important that both contain 12 pieces, not one of which I would ever allow near my body or that of my loved ones. 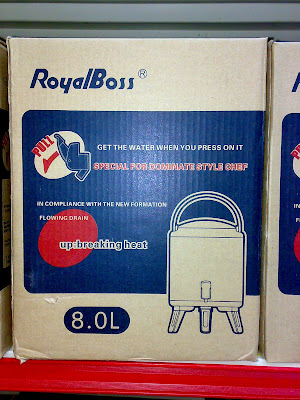 Finally, as we were heading out - the Shopaholics having found an extraordinary array of things, including some surprisingly nice oven dishes, some car accessories, and a truly memorable Hello-Kittyesque (emphasis on the -esque) bathroom set - I saw this quite strong-minded water-jug.

I suppose it shouldn't be a surprise that anything from the fine folks at RoyalBoss® would be "special for dominate style chef" (and haven't we all known a few of those?), and I'm glad that it's "in compliance with the new formation", but this "up:breaking heat" just plain makes me nervous.

We moved on to more conventional pastures with a quick trip to The Big Mall, which comes fully equipped with all mod cons, but really in comparison to such richness, it's rather dull stuff.
Posted by Muscato at 8:00 PM