The March of Time

The passing years are a challenge for even the greatest stars. One moment you're Queen of the Lot, at the top of your game, and the next you've started that long, slow slide that takes you through memoirs, TV movies, and appearances at increasingly obscure film festivals to oblivion. 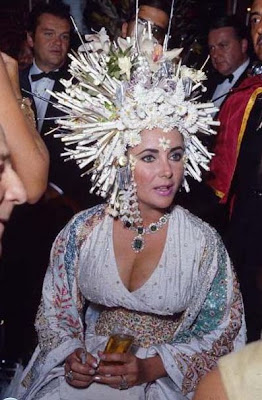 It can start without warning. For example, I believe that Dame Elizabeth, whatever else happened thereafter, experienced the Movie Star equivalent of Jumping the Shark the moment she donned that headdress. 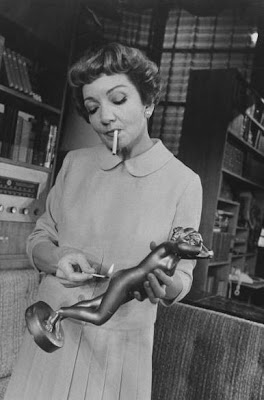 For many, the next step is an ill-advised return to the stage, all too often playing against type. Is there anything in the world less hard-boiled than Claudette Colbert, drooping cig or no? 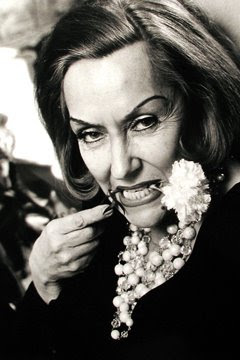 Suddenly, you find yourself wearing unfortunate jewelry and biting nervously at the centerpiece... 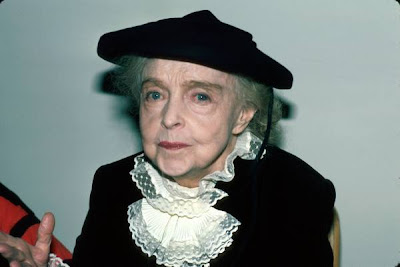 Some few, in the end, achieve a rare grace; Miss Lillian, luckier than most, seems never to have made a wrong step (except perhaps that hat) during the last three decades of her long, long life, holding her own even against Miss Davis and coming out smiling. 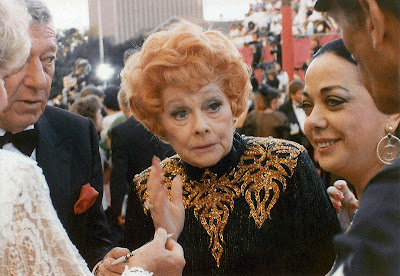 But most are not so lucky, as evidenced by frail, sad Lucy, apparently attempting a slo-mo slap at the hapless (and for the moment, unsuspecting) Dorothy Lamour impersonator to her left.

Beyond that, draw the veil; you don't want to venture into the final stages, the time of This 'n' That, the Motion Picture Country Home ("Irving! Where is Irving? We'll be late for my premiere!"), and moments like the ghost of Mary Pickford appearing live, more or less, from Pickfair on the 1976 Oscars.

It's no surprise that Ruth Elizabeth said it best: old age is no place for sissies. Ironic, though - given that it's mostly sissies that are paying attention...
Posted by Muscato at 5:00 PM