I Love the Nightlife, Local/Tiki Edition 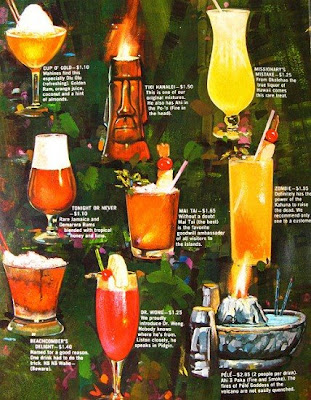 Fresh from our holiday and firmly ensconced once more at the Villa Muscato, we've had this week the pleasure of a houseguest, one of Mr. Muscato's chums from his far-off bachelor days. Said pal is a dedicated, selfless foreign-aid professional working in one of the most difficult places in the world, so we call him the Development Whore, just to make sure he keeps things in perspective.

In celebration of the DW's temporary sojourn here in what passes for civilization, we last night ventured to one of our little town's most treasurable assets: yes, we have a Trader Vic's.

And really, does it get any better than a tiki cocktail or seven? Our edition of the fabled chain may lack some of the ambiance of, say, the legendary Manhattan Vic's in the basement of the Plaza Hotel, but it does the trick. The Plaza Vic's was where, ah, so long ago, I first tasted that staple of all tiki lounges, the Suffering Bastard (is memory playing tricks with me, or did it actually have dubiously Polynesiesque wall masks that would occasionally spit fire? If it didn't, it should have) and used to marvel at the honking LonGisland accents of so many of the patrons...

Sadly, the menu has gone upscale and no long features a PuPu Platter, but we did out best to recall the glory days by ordering as much sweet-and-sour and deep-fried tat as possible.

From there it was just across the way to our Local, which can actually get quite Festive, if you catch my drift, on a Wednesday night, for further refreshment. The DW got quite frisky, doing surprisingly naughty things with the little rubber hula man who came as part of the garnish (or at Trader Vic's, would it be flair?) on Mr. Muscato's Munahene Juice Cocktail, much to the amusement of the assortment of local color that had showed up to amuse us (and ogle the possibility of Temporary New Boyfriend - houseguests can be very popular in these parts).

So, even though we've left vacation, for now, behind us, I like to thing we're still finding ways to keep diverted. How's by you?
Posted by Muscato at 12:46 AM