Invitation to the Dance 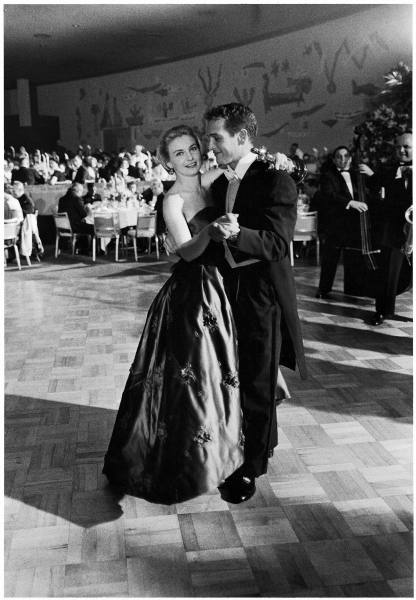 54 years ago tonight, this handsome couple went for a spin at a little party after the Oscars.  Aren't they perfect?  Don't you wish they were your parents?

I once saw this self-same couple, a few decades later; they were crossing the Plaza at Lincoln Center, on their way to a show at the Vivian Beaumont, and I have to say they managed to be almost as heart-stoppingly lovely on a New York early summer night.  In common with so many people in the Business We Call Show, they were not large (quite diminutive, in fact), but the impact of their passing?  Oh, my...

Sorry, to those who pay attention to that sort of thing, for the paucity of postings hereabouts.  Life is, alas, demanding of late at the Villa Muscato, and we are very much on the go.  To start with, Mr. Muscato is off on a business trip, and as always when we're on our lonesome, the dogs and I are at sixes and sevens.

The dogs have no real excuse beyond missing Mr. M. (who is, after all, the one who really spoils them rotten), but I'm still recovering from the most unpleasant bug that first manifested itself almost three weeks ago - dispiriting enough of itself, but made infinitely worse by the superior tones of so many colleagues, who confide quite dismissively that they've had the bug for seven weeks now, and they fully don't expect to feel themselves 'til May.

On top of that, our stalwart domestiche, the tiny and enigmatic Sri Lankan lady who rejoices in the Wodehousian name of Mrs Galappatty-Da Silva, has tripped and broken her wrist.  That would be trial enough, for we quite happily cop to being thoroughly spoiled, but Mrs. G.-Da S. seems intent on proving her indomitability by continuing on as if she weren't laid up, which is both disconcerting and potentially disastrous.  Having been home with the crud, I find myself having to haul her down off chairs on which she's standing tip-toe, cast akimbo, trying to dust the moldings, and similar feats of derring-do that are hardly advisable in a birdlike mature lady at the best of times.

Finally, I too am faced with having to travel for business - jetting off to a neighboring principality tomorrow, for a few festive days of sitting in a beige conference room looking at PowerPoint slides, which for some reason the Powers That Be in the home office are convinced will work wonders in inducing us to new heights of productivity and creativity.  Perhaps it's just that we'll all be so glad to be back home and not staring at PowerPoint slides?

I will miss the dogs (on top of missing Mr. M.), but in any gaps in the dreariness will do my best to scout things out and report back on the fascinating, the enchanting, or the simply ridiculous that catches my fancy in the Sandland Next Door.  In my absence, I have secured Mrs. G.-da S.'s solemn promise not to do anything rash, but I caught her this afternoon casting a speculative glance at the water tank on the roof, a feature of the house that she has long threatened to scrub.  As a result, I'm spending part of this evening trying to figure out how best to hide the ladder...
Posted by Muscato at 2:19 PM