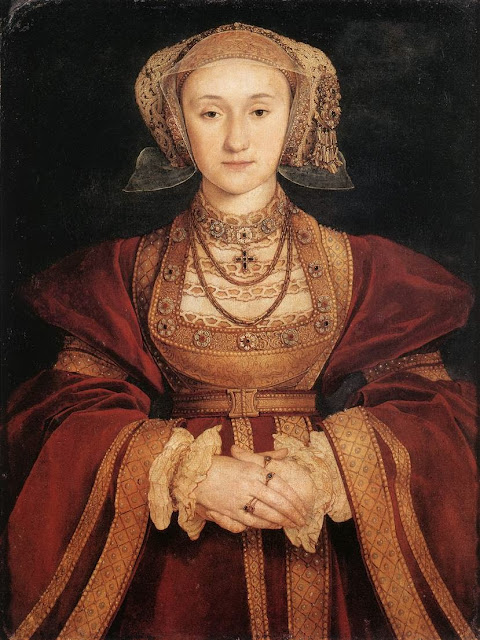 We reach rather further than usual back into the mists of history to salute today's birthday girl - all the way back, in fact, to 1515, when the girl so resplendently adorned here in Mr. Holbein's fine portrait came into the world in, of all places, Düsseldorf.

She's known to us (and, of late, to fans of perfervid television drama) as Anne of Cleves, although she signed herself Anna and might just as easily be called Anna LaMarck, of Jülich-Cleves-Berg-Mark-Ravensberg. Anne of Cleves is certainly a shade more elegant, not to mention simpler.  It's almost definitely preferable to her married name - in a run of ill-luck, she still manages to stand out for the singular ill-fortune of her brief foray at being one of the six Mrs. Tudors.

Given that she was rejected by Henry VIII on the grounds of her supposedly appalling looks, her portraits always come as a surprise.  To modern eyes, when compared to pudding-faced Catherine of Aragon or (if the one iffy portrait is to be believed), sly, weasely Anne Boleyn (the English queen who - again, based on that one portrait - possibly most resembled the one who centuries later never actually got the crown, Wallis Simpson), she seems quite attractive.  Not really a looker, perhaps (and North German hygiene reportedly left much to be desired, even by Tudor standards), but comely enough.  Today she might be the sort of woman who works for a non-profit, has three cats (not four, that would be crazy), and collects whatever brand of figurine is currently most collectible.

I admire Anne of Cleves, I think, for her equanimity, which shines through in her portrait by Mr. Holbein.  It's a characteristic that carried her through not only the disastrous six months of her marriage, but onward for another 17 years, during which she led a generally quite contented life as a kind of extra royal aunt.  She survived not only her marriage, but her husband and all of her rivals, on into the reign of her daughter-in-law, Mary I.  She didn't make old bones and so missed out on all the Elizabethan fun that followed, but even so, of all the Tudor women she may well have had the most congenial of lives, a placid round of moves from town palace to country house and gossiping with her ladies, with occasional trips to court as an excuse to drag out her finery and show off a little.  She must have known, in her Flanders gowns and outlandish headgear (not mention her nose, rather more prominent than admitted to by Mr. H.) that people laughed at her.  What did she care?  She wasn't living in Düsseldorf, and that may well have been more than enough to keep her satisfied.
Posted by Muscato at 5:08 PM