Birthday Boy: The Feats of Strength 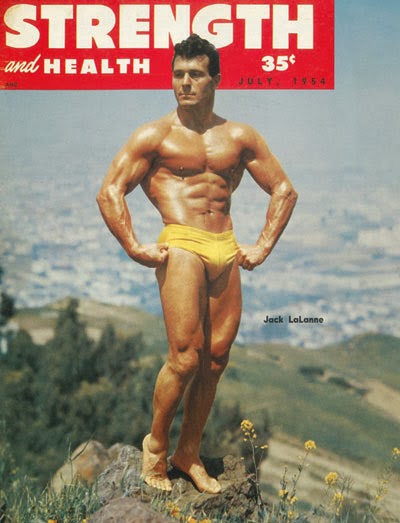 Let's wish a very happy 99, shall we, to the decorative creature seen here on one of your finer Eisenhower-era periodicals?

I suspect that many if not most gentlemen of artistic taste of around my age or a shade more have no trouble recognizing him, for he was a fixture of daytime television throughout our childhoods.

When I was a tiny tot, I spent my days - Mother Muscato having returned to work, and even the devoted Grandmothers Muscato needing a break - at the home of a very nice Lutheran minister's wife called Mrs. Jannsen (known for convenience's sake more simply as Jannsy; I cherished her), and together we rarely missed an episode of The Jack Lalanne Show.  If memory serves, it came on just after the Today show and just before our local ladies' talk program, The Jeanne Carney Show.  Reruns of Lucy also figured large in those late-sixties mornings, and game shows like Password.  But Jack had a special place in our hearts.

I suspect we enjoyed it for more of the same reasons than ever we suspected (the big hook for kids on Jack's exercise program was meant to be his white German Shepherd, the entrancing Happy, but it wasn't Happy that kept me watching).  While I'm normally of the Janet Weiss School of Male Appreciation ("I don't like a man with too many muscles..."), for Jack's sake I'd be willing to make an exception.

Despite a life of fanatical healthfulness, Lalanne didn't quite achieve his apparent goal, immortality.  Still, having reached 96, he clearly had something going on.  The life I lead has little in common with his, but I can see the resonance in something he said, something that illuminates what drove him and with which, while I may not be much for calisthenics, I rather agree:  "How many happy people do you know? Think about it. People work at dying, they don't work at living."

In the end, what is that but a variation of James's celebrated dictum from The Ambassadors - "Live all you can; it's a mistake not to. It doesn't so much matter what you do in particular, so long as you have your life"?  For that matter, it's really just a slightly different angle on Auntie Mame's best line - "Life is a banquet, and most poor sons of bitches are staaaaaarving to death!"

Well, that's something I'm certainly not in any imminent danger of doing, so perhaps I didn't take his life-lessons on board in quite the way he meant them.  Still, it's nice to know that Jack Lalanne would seem to have been every bit as earnest as his TV image.  With his upbeat regime of gentle stretching and sensible encouragements, he brightened up the lives of housebound women (and the occasional sensitive boy) across the nation.  In my mind's eye, there we are, the two us, Jannsy and me, leaning on the kitchen chairs pulled into the living room for the purpose, she with either a cup of coffee or her omnipresent cigarette in her non-stretching hand, carefully following Jack's lead. I'm not sure it made us all that much more healthy, but it gave us a sense of well-being that even The Secret Storm could hardly match...
Posted by Muscato at 10:21 PM