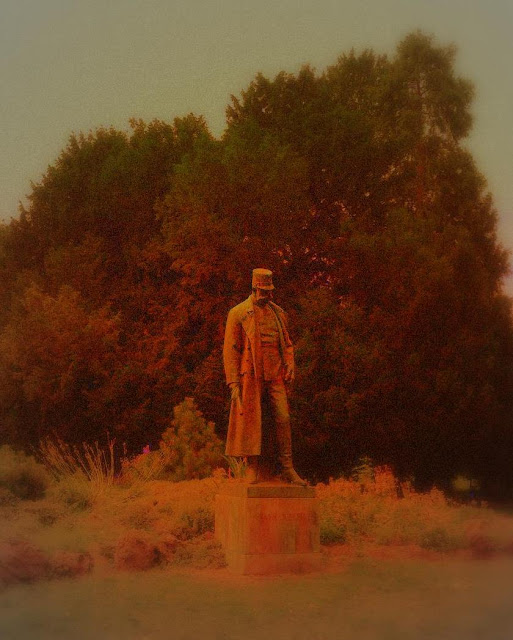 The last "real" Emperor of the unlikely entity that was the Austro-Hungarian Empire, Franz Josef I (his great nephew, Charles I, reigned for two short years at the end of the First War, to no avail) hovers like a gray ghost over the capital in which he ruled for nearly 70 years.

His wife, the high-strung Empress Elisabeth, is the center of something approaching a national tourist cult; his only son, the feckless Crown Prince Rudolf, has a smaller if equally vociferous claque of morbid fans.  The man himself, though, personally responsible though he was for the development of his city into the cosmopolitan crossroads that it was and to an extent remains even today, seems remote.

This statue, in an only lightly tended corner of the Burggarten, a stone's throw from the imperial quarters in the vast and intimidating Hofburg palace, seems an oddly pensive, modest little monument.  His Royal and Imperial Majesty looks lost in thought, his simple greatcoat and neat military cap unassuming.  Perhaps he wonders why he didn't end up with a cosy little hausfrau Empress and a passel of imperial children to rival the litter of his near-contemporary, Queen Victoria.  Instead, he endured the whims of the beautiful Sissi and survived the death of his hopeless son.  For the last 30 years of his life he found comfort - apparently of an entirely chaste nature - in the comfortable company of a well-upholstered and maternal star of the court theater, one Frau Katharina Schratt.  Perhaps the sculptor caught him walking, as apparently he sometimes did, from a side door of the Hofburg to the infinitely more gemütlich house not far off in which he had installed her.

Compared to the faintly hysterical adulation that follows the Empress and Crown Prince even now, the memory of the Kaiser seems more that for a fondly, distantly remembered uncle.  He had a long, rather sad life.  A story that followed him after the opening of the magnificent court opera house seems typical of how melancholy goings-on seemed to trail him.  For various reasons, the ring road built at the same time as the opera house had proven higher than originally planned, making the position of the hall a little less majestic than had been intended.  When the Emperor observed that the the Hofoper did in fact seem a shade low, the building's two architects were so devastated that one committed suicide and other suffered a fatal heart attack.  For all the years and decades after, Franz Josef never again ventured a public opinion.  Any new experience, achievement, monument, invention, occasion large or small, a meal or a masterpiece, instead received the same careful observation: "It was very nice; it pleased me very much."

I was interested to learn that Frau Schratt, who sincerely pleased him like no other (except perhaps his favorite dish, the delicious boiled beef tafelspitz - I had some last night; it was lovely), lived on long after the age of Franz Josef, the long era of waltzes and red velvet and court occasions, was a distant memory.  She occupied her comfortable house off the Ringstrasse (one imagines a mansion of stained glass, framed photographs, potted palms, and strong central heating) until the spring of 1940, when changes even more momentous than the fall of the house of Hapsburg were about to preoccupy Vienna; one wonders what she made, if she ever knew of it, of this handsome but unprepossessing statue of her estimable patron...
Posted by Muscato at 5:14 PM