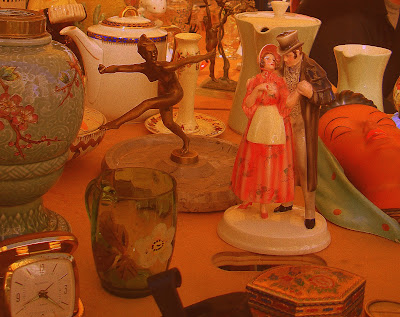 So this was my last day in Vienna, and a lovely one it was, too.

I started out by wandering through the Naschmarkt, the vast and tempting open market where you can buy anything from dragon fruit to apfelstrudel and pretty much everything in between.  On Saturdays, the area has the added attraction of one of the most extravagant flea markets I've ever seen, a smorgasbord of wonders, from battered old portraits of long-dead countesses to punk albums from the late '70s.  The detritus of Empire is everywhere, as here, where a courting couple shares tablespace with an exotic little dancer having an Isadora moment, a traveling clock, and a serenely smiling ethnic lady of indeterminate foreign origin.

From there it was on to the Hofburg, to see the private apartments of Franz Josef and his Elisabeth.  The rooms themselves are shown in combination with a very curious attraction billed as the "Sissi Museum," essentially a fan's guide to everything eccentric and morbid about the late Empress, from extracts of her lamentable verse etched into the mirrors of the palace's gilded salons to the very stiletto that brought her troubled life to an end.  After that, the actual rooms themselves seem very staid, and really rather sad.  The Emperor and Empress of Austria-Hungary, at least in their city home, spent their days and nights in rooms as cold and impersonal as those in a railway station hotel of the era, if admittedly a little grander - lots of spindly little chairs, potted palms, and terrible history paintings of Great Moments in Hapsburgiana.  It's telling that in the whole place, one of the more distinctive, if not tasteful, really, things to be seen is in the vast museum of court silver and china, where a dessert service that was given by Queen Victoria to mark the opening of the Crystal Palace reminds one that when it came to Victoriana, no one did it better than the lady herself.

The two-dozen or or so imperial chambers all look out into one or another of the vast complex's inner courtyard; one of the last on view is the dining salon in which the family would dine with their inner circle of attendants. It's the only room that looks out onto the street, and it was easy to imagine one of the younger archduchesses quickly, wistfully catching a look out onto a comparatively ordinary street, even on a Saturday this many decades later infinitely livelier than the gilded splendor within, one of the city's inevitable accordionistes sawing away a block or so away.

One escapes the premises - even I, a palace-addict - with a palpable sense of relief.  Fortunately, another of the day's achievements was establishing, at last, just exactly what everyone seems to be drinking in Vienna, a distinctive (and distinctly festive) orange-colored concoction that turns out to be an Aperol Gespritzt, a mix of white wine, soda, and a Campari-like aperitif with a slice of orange.  Marvelous, and deeply consoling after the sad parade of family unhappiness on display at the Hofburg.

So it's off to the airport in the morning and back to what passes for reality in and around Our Nation's Capital.  A week isn't nearly enough in this old capital, and clearly I shall have to start plotting as soon as possible to return, if at all possible with Mr. Muscato in tow, as the food here will surely turn his head, even with all of the challenges involved in making sure that everything is served ohne Schweinefleisch.  I had thought it wasn't possible for me to like a European city more than Amsterdam; it turns out I may be wrong...
Posted by Muscato at 5:14 PM