Remembrance of Sleaze Past 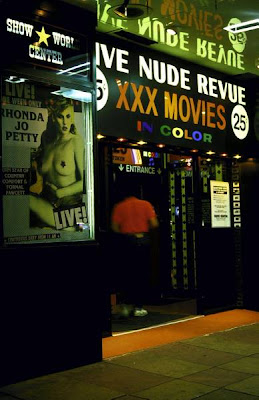 I ran across this image recently and was seized with nostalgia. When I moved to New York in the late '80s, this fine theatrical establishment was just 'round the corner from my tiny flat, part of the great, messy, tawdry, crime-and-drug-laced spectacle that stretched out from Times Square and 42nd Street.

All these years later, that same neighborhood is Tourism Central, a cacophonous mass of souvenir shops, chain restaurants, and Disney musicals. The dim, cheap railroad flats like the one I lived in have been gentrified, and Hell's Kitchen is just another post-porno pomo-boho district. Of course, because of the Internet, these physical redlight districts have given way to their digital successors - meaning, in a way, that the old Times Square is now, to an extent, in all of our neighborhoods.

But I still miss passing Rhonda Jo Petty and her ilk on the way home from the grocery store on a rainy November evening. The muggings and the crack dealers, not so much. Pop-up ads and phishing schemes may be their contemporary counterparts, but there's nothing like the neon, carnie atmosphere of the old Eighth Avenue online, and in an odd way I can't help think that we're the poorer for it...
Posted by Muscato at 2:02 AM