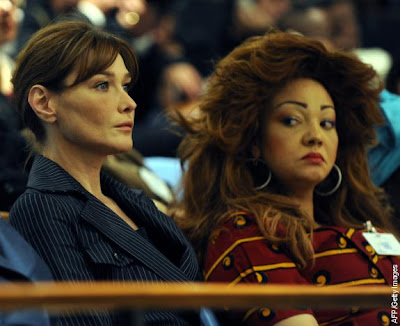 I've been remiss, having been meaning to feature this treasurable little moment of international drama ever since dear Plumcake brought it to our attention back around Hallowe'en. Yes, it's the coming together of two of the world's more glamourous power-spouses, and don't they look like they're having fun?

Mme. Sarkozy appears to be hoping that a coping strategy more usually used when confronted with bears will prove effective; she is fighting to stay as calm as possible and likely about to try sidling out of range in the hope that that her formidable neighbour won't notice. The divine Mme. Chantal of Cameroon, by contrast, is (as usual) not impressed. At all. What she's thinking about la Carla's mousy 'do, gray pinstripes, tacky folk-pop singing, and nude photoshoots clearly doesn't bear repeating.

But wouldn't you kill to hear her inner monologue?
Posted by Muscato at 10:16 PM