Notes From All Over

At last, it seems, our busy social season is drawing to a close, as heat engulfs our little Sultanate and the expat community starts its annual peregrinations to cooler climes. I went last night to the penultimate concert in this season's offerings by the royal symphony; Mr. Muscato, curiously, always seems to develop a slight headache on these evenings. 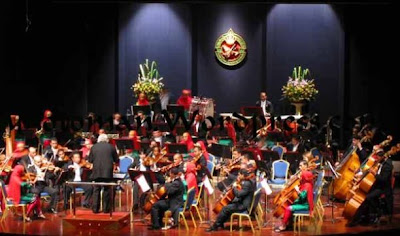 The symphony is one of the more appealing curiosities of our corner of the world; a true court orchestra, it is the monarch's own ensemble, created at his diktat entirely from local performers (making it the only all-citizen orchestra in the region - you couldn't walk into the Cairo Symphony without tripping over players from Minsk, Pinsk, and the capitals of any number of ex-Soviet -Stans). It dutifully works its way through a range of light and middling classics, under the direction of a rotating case of mostly entirely deservedly obscure imported conductors. I shall have to tell you, one day, the tale of the concert that featured the world's direst (and possibly vastest, and that's saying something) mezzo...

But last night's was rather better than many, with a Turkish focus thanks to being presented by that country's very dapper ambassador. A Turkish piece opened the program (and very good, too - vaguely Copland-ish, a kind of Anatolian Spring), followed by a Grieg piano concerto played by an appealing young Turkish soloist, one whose choice of evening gown (plunging, clinging, and trailing peach jersey) was a startling reminder that the Muslim world is far from uniform in its thinking.

She made for a piquant contrast to the ladies of the ensemble, who wear stage versions of traditional local dress, which is both colorful and entirely all-encompassing (the men wear white tie, and the young locals look adorably uncomfortable in their unfamiliar and doubtless constricting splendour as they saw away).

In any case, as in much of the world, one of principal reasons to be in faithful attendance at these evenings is to see and be seen, and last night the roster of local social stars was in perhaps its last full array until next autumn. There was the usual sprinkling of ambassadors and ambassadresses; a generous helping of academics and their spouses (identical the world over in their tweeds and enthusiastic expressions); an assortment of British Banker Types and their dressy ladies; a nattering crowd of Young Internationals (off to go dancing later); and a number of local types who are familiar figures from the social columns - the Hat Lady, for example, a dear creature resplendent as always in flowing robes of her own design, complemented by vast flat pancake hats worn at a roguish angle (last night's toilette was crimson crushed velvet, and lovely it was).

We adore the interval at these concerts, when all concerned rush to the theatre's reception room for the only known "wet" public gathering of its kind hereabouts - for a few minutes, as we jockey for wineglasses and make catty remarks, we might be anywhere in the world. 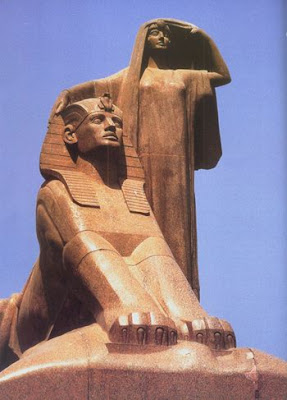 Today, Mr. Muscato (miraculously recovered) and I watched the President's speech from Cairo, and we felt rather proud of dear Egypt. The city looked lovely on television, and I hope that on his way to the stately auditorium at Cairo University Mr. Obama caught sight of the statue above, which sits at the head of the long avenue that leads from Avenue Charles de Gaulle to the University. It's one of my favorites, Egypt's Awakening by the marvelous Egyptian Moderne sculptor Mahmoud Mokhtar.

As for the speech - oh, darlings, that's politics, and outside my ken, but I do think he looked wonderful, and people seem to have appreciated it very much. Whether it does any good, we shall see, but as for me, I keep thinking about the phenomenon of hearing the "New World Symphony" (last night's second half) out here in this part of the world. The string-playing may have faltered, but the feeling was there, and it was one that would deeply depress anyone who hopes for a monolithic, anti-Western Muslim world. And I like to think that's a very good thing.
Posted by Muscato at 9:34 AM