Sunday in Paris was the annual Fête de la Musique, a day, we learned, in which Paris boasts upwards of 20,000 concerts, ranging from orchestral galas in the city's great parks to impromptu busking pretty much everywhere we looked. Despite all the apparent variety, though, it still seemed to us that about 19,900 of the concerts featured regrettable young people playing loud local variations on "le rock" circa 1993.

Even so, we had fun. The Egyptian Cultural Service, which we passed by chance, had rather surreally brought in an obscure star of state television, a beaming, wigged, elderly gentleman who plays what can best be described as an Arabic take on cocktail organ (now there's a forgotten genre. And with good reason). Enjoyed amongst a crowd of mostly entirely baffled French people at a street concert, his art took on an air of the sweetly surreal.

And in the Marais, the music ran from Piaf to techno (not all that far, really, with that crowd), and we lounged in the Rue des Lombards until all hours. Mr. Muscato is quite fond of an establishment called Le Bear's Den; I was actually rather taken with the local version of the Eagle, which is infinitely lighter-hearted and more festive than either its Dutch or American sisters. 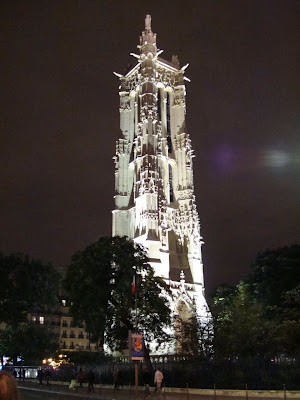 On the way home we passed one of my favorite landmarks, this flamboyant tower not far from the Rue Sebastopol. 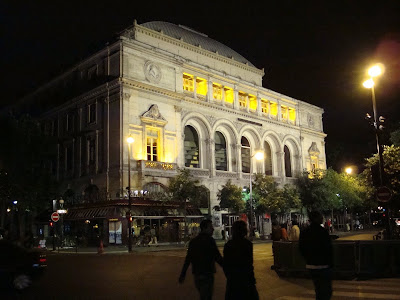 And then another old friend, the Théâtre Sarah Bernhardt; in addition to having staged some of that great lady's greatest triumphs, the café on the corner there is where I had my first ever French lunch - a croque madame, if memory serves - all those yonks ago on my very first trip to Paris.
Posted by Muscato at 3:46 AM