A recent post over at Stirred Straight Up brought to light of day the career of 60s novelty singing act the Kim Sisters. They are visions of Oriental Glamour - and they play the marimba. What more could one ask?


Well, what their demented lounge act called to my mind was something even rich and stranger, and with nothing except the highest of Space Age Bachelor Music style to link it to the Kims: I'm thinking of one of the maddest films I've ever seen - certainly the very strangest to include a globally renowned author as a half-naked waxwork. 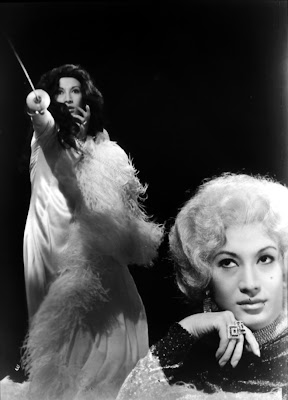 
It was written by Yukio Mishima, who is also the aforementioned waxwork, one of the Lizard's love-victims. The whole thing is really indescribable. 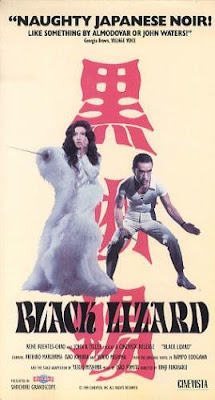 It had a brief U.S. re-release in the early 90s and basically disappeared thereafter, never having seen a (legal) DVD release.

Which seems a shame; it is very nearly a perfect film, at least in the select genre of the transvestite Asian jewel-thief/psychokiller thriller musical.
Posted by Muscato at 8:50 PM