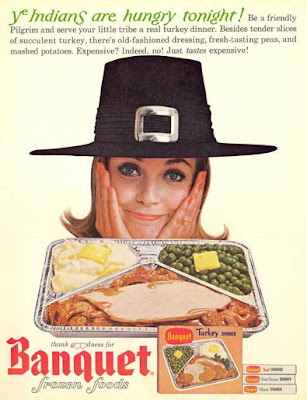 It's going to be a quiet holiday at the Café; having had a business celebration earlier in the week, I'm sated on the turkey front and have successfully resisted all invitations arising from the overwhelming urge other expats have to ensure that no strays or orphans miss out on this lovely and traditional day of gluttony and family recrimination.

Oh, I'm fond enough of Thanksgiving, mind you, and have many happy memories, stretching from Rockwell-perfect celebrations in the late 60s to modish 90s family-of-choice observances in Manhattan. Since coming overseas, I've celebrated everywhere from Simpsons in the Strand in London to the Valley of the Kings. There will be something pleasant about a solitary day, marked, as Christmas skeptics do in New York, with takeout Chinese and a movie (although mine, alas, won't be at Film Forum).

It is not, of course, the mere presence of cranberry sauce in a crowd that allows one to be thankful, and even à deux with the dog over the local interpretation of Kung Pao chicken, I am. I'm thankful for all the essentials with which I'm blessed and for the extravagances and little extras life affords. I'm thankful for the challenges (trying as some of them are) of this odd existence. I'm grateful for the big things (health, Mr. Muscato, and a steady income among them) and the small (that iTunes, for example, has at last made available the Scarlatti keyboard sonatas as interpreted by the great Wanda Landowska, or that I've finally found a good moisturizer that doesn't make me break out - Oil of Olay Complete all the way, baby!).

Most of all, though, I'm more than ever aware of and thankful for all the connections that knit the world together - ones like family, which can often be as painful as they are joyful; friends, old, new, actual, virtual; and all the others - social, political, technological, physical, you name it. We live in this bizarre world in which something written at the far edge of the Arabian peninsula can instantly be read in places as far apart as Pakistan, Queensland, and Quebec (just to pick three Gentle Readers who've stopped by the Café in the past hour or so). We deal with high-school friends five thousand miles away as easily as we do colleagues the next office over. And we have to be as aware of what's going on in places like Mumbai, Beijing, and Manila (to choose the top three stories just now on Google world news) in order to figure out our lives as our grandparents did the three nearest towns.

With Mr. Muscato away, I've been watching lots of DVDs, among them the HBO production of Angels in America. There's a lot there to blow you away (and to be thankful for, for that matter), but the one that always does it for me (along with the quietly epic finale at the Bethesda fountain, on stage perhaps the most moving thing I've ever seen performed) is the character Harper's fantasia of healing while flying from New York to California:

Night flight to San Francsico. Chase the moon across America.

God! It’s been years since I was on a plane! When we hit 35,000 feet, we’ll have reached the tropopause…the great belt of calm air. As close as I’ll ever be to the ozone.

I dreamed we were there. The plane leapt the tropopause, the safe air…and attained the outer rim, the ozone, which was ragged and torn. Patches of it threadbare as old as cheesecloth, and that was frightening!

But I saw something only I could see - because of my astonishing ability to see such things - souls were rising from the earth…far below. The souls of the dead…of people who’d perished from famine, from war, from the plague…and they floated up! Like skydivers in reverse, limbs all akimbo, wheeling and spinning…

And the souls of the departed joined hands, clasped ankles and formed a…a web. A great net of souls. And the souls were three-atom oxygen molecules of the stuff of ozone, and the outer rim absorbed them and was repaired…

(pauses, tears welling up in her eyes, a sad smile on her face)

Nothing’s lost forever. In this world, there is a kind of…painful progress. Longing for what we’ve left behind, and dreaming ahead.

At least I think that’s so.

Happy Thanksgiving.
Posted by Muscato at 1:44 AM