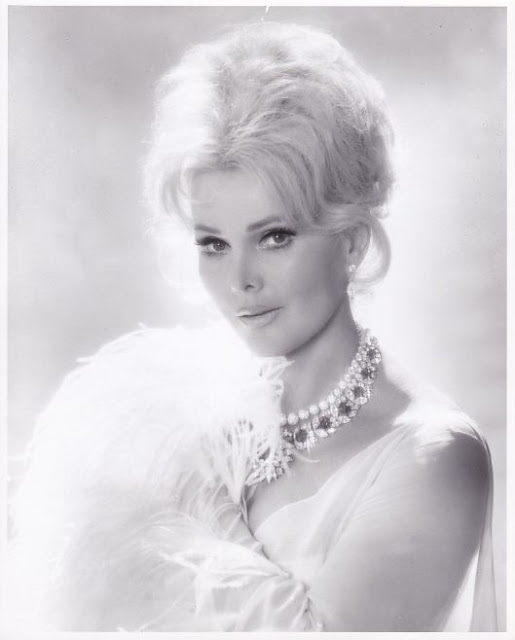 Well, it's deepest gray and pouring rain here in Our Nation's Capital, and I have to admit that my seasonal funk continues. If anything, though, were to drive away the clouds, I think it would be spending some time, as I've done this afternoon, in the very personable company of today's Birthday Girl.

I rather think of Eva Gabor as the successful sister - of the three, she best straddled the line between genuine and ersatz fame, and while no one ever mistook her for Bernhardt, she had a very real comic talent and scads of charm (Magda had a great deal of the latter, and Zsa² could deploy a smidgen of the former and lots of the latter, but was clearly a great deal more of A Piece of Work than her baby sister). She also had a good head on her shoulders - I greatly enjoyed this interview, from 1985, in which it's clear that she was more than a mere figurehead at the wig company that bore her name ("It happens to be number one in the world...," she coos). She's "pre-teased" up in the header, by the bye, for her own description of her product; I think it's apt, though, for she always gave one a great deal more sense than her sisters (especially the at-the-end-so-pitiable "princess") that she was entirely in on the joke.

Decades before Letterman, she was an engaging Mystery Challenger on What's My Line?, and in between she was of course the chatelaine of a little farm just outside Hooterville, a town that to me has all the resonance of (and a great many yuks than) Yoknapatawpha. That's probably how I first encountered her, as a tot, and it was always great fun to have her turn up here and there, over the years. She left far too soon, and along with the rest of her brood, she's missed.

We see her here, as you might have guessed, pictured by Hollywood's supreme master of what might called Glamour at Twilight, John Engstead. She's deploying the full arsenal of the trade she learned at her mother's knee: feathers to soften the line, makeup that flatters rather than calling attention to itself, hair that owes very little to nature, jewels to add sparkle, and an expression half alluring, half amused (one that's harder to carry off than one might imagine; just ask that star recently - and improbably - fêted at MoMA, Vera Hruba Ralston Yates; the best she could manage was something between annoyed and dyspeptic).

So that's my Sunday - a little wallow in the shoals of Gaborabilia. Beats the weather, that's for sure. As for the rest of life, well, after a week of shirking, I'm heading back to the office tomorrow, and on top of that I'm batching it. As a birthday present, I sent Mr. Muscato packing out west to catch some sun and hang out with pals in the desert. It's actually rather nice to be home alone with the dog. It turns out that Green Acres is plentifully represented on YouTube, and I think my enjoyment of a few episodes would far outstrip his patience...