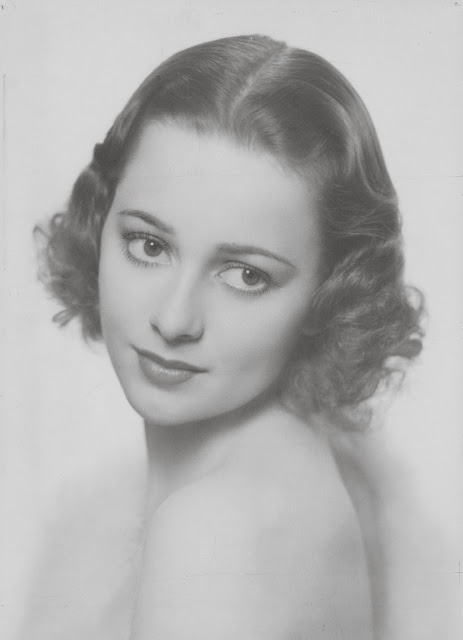 So she's 100 today, this dewy-eyed ingenue. I suppose it's hindsight, but it seems to me that even here, at the very earliest end of her long journey, there's more to her than meets the eye. Now, some 80 years later, it's indisputable: Miss Olivia de Havilland is very much the real thing.

She was never the biggest star - when you're on the Warners lot at the same time as Bette Davis, there's not much question who truly rules the roost - but nonetheless it was an exceptional career, and one she tended with as much energy as and, it could be argued, greater prudence than, almost any other star.  She's remembered for the combination of apparent fragility and inner strength that inform her defining roles, but she was a surprisingly versatile actress. She was at home in period pieces (including that big one that people keep talking about), but she shone in light comedies (few much remembered today, but very popular at the time), and she ended her prime Hollywood years in a string of tense and enormously effective dramas that peaked with The Heiress, in which she's heartbreaking and, in the end, stunningly austere.  She was sweet, but never treacly (even Melanie, on paper a thankless sort of part, in her hands becomes the moral linchpin of what is otherwise Scarlett's story first to last), and she could be steely in shades and nuances from simply firm to startingly evil (see The Dark Mirror, among others, for the latter; whatever she was in life, she was an excellent Bad Sister on screen).

Even her forays, later on, into the kinds of roles that occupied most of her coevals throughout the 1960s - the genre known as Grand Dame Guignol or, less kindly, hagsploitation - were generally a cut above. Lady in a Cage may not be art, but it worked, and as for Hush, Hush, Sweet Charlotte, well, she's really only it as a kindness to her co-star.

But for the second half of her life, work was never really her focus. When you have a townhouse in Paris and a full, rich life, you can rise above even the occasional turkey like The Swarm, don't you think? And until the end, she was canny, choosing parts - the Dowager Empress of Russia, the Queen Mother - that only enhanced her reputation for patrician elegance.  And now she's something almost like the Fairy Godmother of the movies, distant but somehow enormously reassuring just by the fact that she's still here, issuing gracious messages to fans and, we're told, looking forward to an elegant dinner with friends this weekend. She would seem to be as unfazed by the prospect of being a centenarian as she was by the burning of Atlanta or, for that matter, being handed yet another Errol Flynn picture.

Hereabouts, of course, we know that, beyond being very nearly the last of our links to the Great Age, she holds another role. Today, I wonder if, sitting in her high-ceilinged drawing room, full, I would imagine, of fine cut flowers and silver-framed photographs, she'll spend a moment or two paging through a book that sits among the mementos of her long, rewarding life.

Perhaps her sight, at last, is going, she thinks, she who's been so proud of the clarity of her clear brown eyes (don't be fooled, Jack Warner cautioned those who'd cross her; she "had a brain like a computer concealed behind those fawn-like eyes"). She can't think why, but it seems to her the names that fill the pages of the book, each (all but the very final few) now with its neat line straight across, are fading. On every page or two, a name here and there remains -so many friends, if also every now and then one less fondly thought of - but so many now are nearly out of sight. Perhaps by the time - not so very long now, she thinks dispassionately, but not quite yet, if she has her way (and when has she not?) - when her own name (and it had given her a turn, she remembers, when she first saw it there, in among the last few names) is stricken out, there'll be nothing left to pass along. No one left to pass it to, for that matter, she thinks...

What was it Mr. Reinhardt had said, back in that midsummer that now is even to her something like a dream? She turns to another book and reads - nothing really wrong with her sight after all, she sighs... Oh, yes: "I believe," he wrote, "in the immortality of the Theatre, it is a most joyous place to hide, for all those who have secretly put their childhood in their pockets and run off and away with it, to play on to the end of their days.” She ran away, she reflects, more than once, and each time more successfully; now it's up to her to play on, until the end of her days.
Posted by Muscato at 10:58 AM