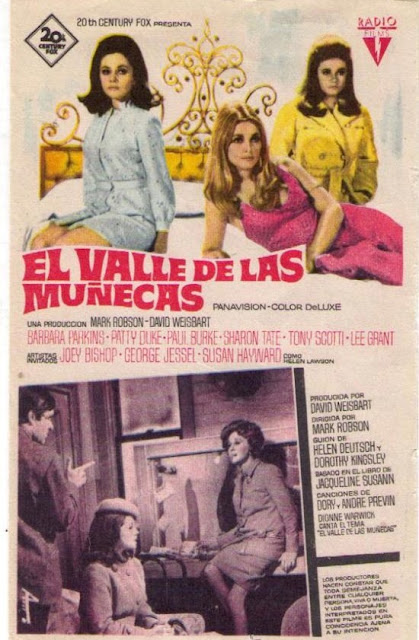 Carissimi, I have a shocking admission to make...

Until this weekend, I had never seen Valley of the Dolls. Or rather, as I'm a Confirmed Bachelor of a Certain Age, I'd never seen all of Valley of the Dolls, since the picture is more or less a string of Big Camp Moments highlighted in a thousand gay-bar video montages strung together with some - far, far too many, really - of the most turgid expository scenes ever put on celluloid.

But now I've seen it, and the most remarkable thing about the experience is that it actually managed to be worse (much, much worse) than I had long imagined. This may be an unparalleled example of a film in which literary dross was turned into cinematic turds, with every single element - acting, music, costumes, choreography, script, hell even the lighting - as witless, aesthetically bankrupt, and leaden as it could possibly be.

And that, of course, is the secret of its perverse genius: its very crapulence is what assures its place in the ranks of the screen immortals, right up there with Citizen Kane at one end of the spectrum and (far closer to home) Plan Nine at the other. Now, others have and at far greater length and with infinitely more wit than I dissected the hapless mess that is VotD; after all these years, there's not really all that much more to say. But herewith a few thoughts, and something like a revelation:

Poor Patty Duke really is as coarse and awful and hammy as a few clips might indicate; by contrast, Sharon Tate is sometimes lauded for her acting as the ill-fated sexpot, but surely that's only in comparison to everyone else around her. It doesn't help that she shares so many of her scenes with Lee Grant, playing her enigmatic sister-in-law.  Now, Grant really isn't bad, but she seems to have been beamed in from some far more ominous and existential film (perhaps something Russian, from Dostoevsky). Because this is the Cinema of Extremes, Duke's hypermanic performance is more than offset by Barbara Parkins as Anne Welles, who seems to be just about the most successful accidental catatonic supermodel of all time. Parkins reads her lines as if she's just been presented with the script as she came out of a sound but not especially refreshing sleep, and it's telling that she achieves the apex of her histrionic skills on the immortal line, "Neely, you're being obnoxious." Which could actually stand on its own as a tagline for the whole production.

The men are totally exiguous, unnecessary in a way that recalls The Women (although I swear I have stronger memories of Stephen Haines, Howard Fowler, or certainly Buck Winston than I do of any Valley man except possibly, from their cameos, Joey Bishop and Georgie Jessel as Themselves). Even Ted Casablanca, so infamously and endless quoted for his lack of being (and it's a word that crops up a lot) a fag, barely registers.

And then there's Susan Hayward. There's only so bad someone as much a pro and a veteran as she could be, and it can't be denied that she does every single thing she can with the lurid yet somehow underwritten role of Helen Lawson.  I was trying to figure out why, despite her formidable best efforts, it all still doesn't exactly land, and then I think I discovered the secret.

Helen Lawson, of course, is meant to be a Giant of The Theatre, and not just any ol' theatre, but Broadway, Musical Division. Think Ethel Merman (Jackie Susann certainly did, God knows). Now, Hayward acts the hell out of the idea of a tough old trouper, the kind who put the Broad in Broadway, and I especially love how, in her most famous line (about what a certain place doesn't go for), she puts the accent on the first syllable  - "So ya come crawlin' back to BROAD-way..." She also smokes up a storm, which increasingly seems as period an acting device as pulling out a fine enameled snuffbox.

No, the acting's not the problem. It's the voice.

Hayward was hired, as legend and every gay boy in Manhattan has it, after the ignominious departure from the set of Judy Garland, whose real life was messier (and infinitely sadder) than anything dreamt up to give Patty Duke an excuse to thrash clumsily about. She gave the requisite dose of star quality to a picture that sorely needed it, but wasn't quite up singing in the Mermanesque manner. Like her co-star Duke, she was dubbed. Unlike Duke (whose ersatz singing voice is every bit as raucous and off-putting as any other thing about Neely O'Hara), she was given the voice of one of the most charming and elegant interpreters of American popular song of those or any other times - it's not slumming in any form to have the voice of Margaret Whiting appear when you open your mouth.

What Whiting isn't, though, is a Broadway diva - fierce, demanding; in short, a barracuda. No; her voice is velvety, her diction incomparable, but she's just not able to do much with "I'll Plant My Own Tree," which comes off as a very distant cousin indeed to the then-popular me-me-me song that figured in so many musicals of the era (think "Don't Rain on My Parade" or "I've Gotta be Me"). With Whiting's voice, Hayward's attempts at putting over an eleven o'clock number are more mystifying than electrifying. She poses and gestures and basks, despite the presence of a wholly risible Calderesque-mobile that no real diva would have put up with for a minute, but to not all that much avail.

A brilliant YouTuber, though, has figured out the problem. A real diva can put anything over, or at least make you think she is, even this nonsense about Trying Hard In My Yard. And it turns out that, given a real showstopper of a voice (the most showstoppingest of them all, if ask me), Hayward really can persuade you that she's all that.  Judy Garland, you see, before the inevitable hook sans ovation, recorded "My Own Tree." And this clever YouTuber replaced the estimable Miss Whiting with the immortal Miss G. - and now you can see what Helen Lawson's all about. Even her bizarrely angular approach to stage movement almost makes sense. See for yourself:


Anne Welles is still having none of it, but I think it's a distinct improvement.

So that's what I've been up to here in Our Nation's Capital on a distinctly gray and drizzly Independence Day Weekend. I can only hope you're up to something a shade more festive, although i can't deny I'm having fun in my own little way. And the dogs are in heaven, as I've hardly left the house.  Happy Fourth!
Posted by Muscato at 4:30 PM