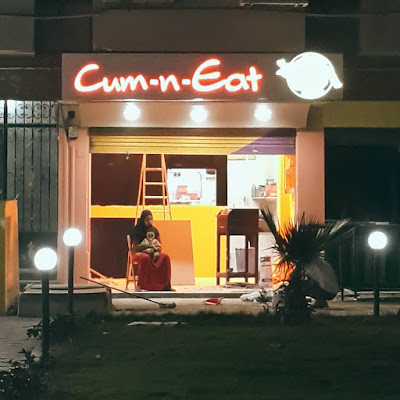 O, Egypt. I do love you, but how I wish your entrepreneurs would occasionally invest in a native-language proofreader.

On the other hand, such due diligence would deprive the world of many joys, from all those "No Barking" and "Eis Cold Bebsi" signs that dot downtown Cairo to this little wonder, a new café that's currently attracting a fair amount of derisive attention online.

Every little bit of amusement helps these days, I find, and I've decided I'm just going to have to look for more silver linings, given the number of clouds about.  Fortunately, this weekend provided all sorts of small comforts.

Among other things, I've discovered that a little Aperol does marvelous tihngs to a tall iced seltzer, just the thing for a hot summer afternoon. Also, I would seem finally to have mastered a really first-rate turkey chili, so we're set for leftovers for the week. And, on top of that, I dug up from the bottom of a box of linens a cache of tee-shirts dating as far back as the first Reagan administration - all of which now fit, albeit snugly.  Not to mention, I have to admit, smugly.

As for the linens, add them to the list of possessions about which I feel increasingly ambivalent. Do I really need incomplete sets of three different kinds of dinner napkins, most all too clearly marked by Grandmother Muscato's excellent and apparently indelible cooking?  Or a dozen or so tablecloths of a vastness, formality, and overall level of wear-and-tear that confirm both her excellence as a hostess and frugality as a housekeeper? The more I look around me, the more tempted I am to go full-bore KonMari and just end up sitting in a bare room with an iPad, a mattress, and the dogs.

And the Mister, but that goes without saying. Poor dear, his work takes him outdoors part of the time, and while the heat in Our Nation's Capital is nothing like that of the Sandlands, it's still inching toward the fierce. And, if reports are to be believed, only going to get more so this week. Do you wuppose iced turkey chili would be something to consider for a nice summer supper?
Posted by Muscato at 8:45 AM