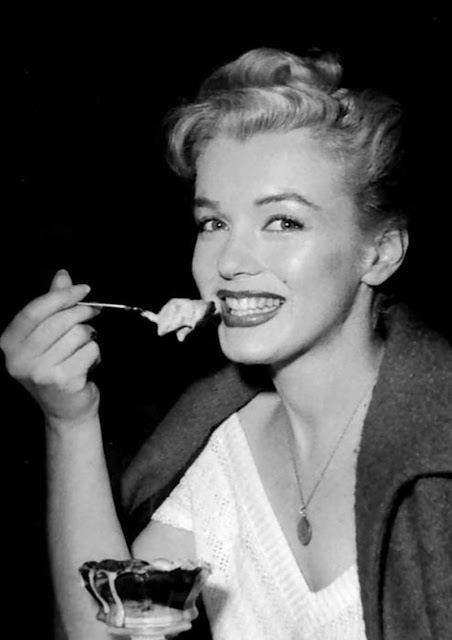 A quiet weekend at home, and herewith few random notes on life chez nous, at least a part of which will explain the choice of dear Mrs. Mortenson Baker Monroe DiMaggio Miller indulging herself in a little treat...

We are at last having a genuine summer weekend - hot, clear, and lovely. After the holiday debacle of thunderstorms and chill last week, the change is exceedingly welcome.  I've spent the day being devotedly domestic. With the Mister still off gadding about in his homeland (spending the weekend swimming in the Red Sea, damn his eyes), I've had to take on one of his usual chores, making a large batch of the dogs' food (something we got in the habit of doing of when we lived in Africa, as a result of which the benighted pair of them cordially disdain any offering from Alpo or even Iams). It's an elaborate process, but one now successfully completed, as have been several loads of laundry, a good tidying up of my desk, a brisk clean of the balcony, and a trip to the supermarket.

I've become, on that front, a somewhat shamefaced convert to - and it still slightly embarrasses me both to admit and to confess why - Whole Foods.  Yes, it's madly expensive, and yes, we can get as good or better produce at the Chinese/Dominican supermarket just up the road. I really can't justify going, or paying those prices (although every is so pretty, one must admit), except...

They have Halo Top. And no one else does.

What, you may ask, is Halo Top, and why would one seek it out? Is it some sort of Christmas decoration?  To which I can only answer no, no, no - it is, in its small way, a sort of salvation.

You see, the only thing that I've really, over the past year, felt even the slightest bit deprived about, as a result of my necessary and generally entirely tolerable post-open-heart regime, is that ice cream, carb-wise, is pretty indefensible. Now, I'm allowed the occasional day off, as it were, and I do take advantage every now and then, but having gone low-carb, I'm genuinely surprised at the extent to which I simply I simply don't miss, crave, or especially want onetime staples such as pasta, potatoes, bread, or rice.  Even most desserts are just the barest of regrets.

But then there's ice cream. Is there anything nicer, on a quiet evening, that sitting down to a good old movie and the better part of a pint of something lovely and rich and sweet? My particular poison was Häagen-Dazs Heath Bar Crunch, but I'd happily settle for almost anything coffee-flavored, most sherbets (with a particular fondness for rainbow), or even the occasional simple vanilla.

These days, I'm a happy convert to riced cauliflower and all sorts of clever spaghetti squash recipes*; I dutifully whip up smoothies of kale and avocado and oatmeal... but oh, I do miss ice cream.

Enter Halo Top. It's high protein, it's relatively low carb. It's comparatively low calorie. And it's delicious.  I won't say it's a perfect replacement, in every way as lucious as a nice big bowl of Ben and Jerry's - but it's damn close. God knows what goes into it (and don't tell me. I'm terribly virtuous on the whole, and one vice, surely - well, one beyond a glass or two of Champers now and then - can certainly be forgiven, no?).  The flavor range is at least to date somewhat limited, but having now road-tested a few pints, I can safely say that it goes very well with nice evening at the (home) movies.

It's these little discoveries that make navigating a limited diet so interesting, really (well, at least to me; I won't fault anyone who's nodding off by this point).

On the movie front, by the bye, I seem to have fallen into a bit of a Senior Citizen Film Festival this week. One night I watched My Old Lady, in which Dame Maggie Smith spars delightfully with Kevin Kline over the ownership of a down-at-heel but grand Paris apartment (while Kristin Scott-Thomas looks on, apparently waiting for her part to be written, something that never, alas, happens). Then last night it was Mrs. Palfrey at the Claremont, a really entrancing little two-hander, more or less, for Joan Plowright as the titular character and the extremely well-boned Rupert Friend as a footloose young writer.

That neither picture is better known seems to me both a shame and hardly a surprise, given that they are singularly short of explosions, zombies, or (my particular dread of the moment) elaborate "backstories." I don't know about you, but I really don't have to know all that much about every character's childhood to enjoy a flicker, and I really, truly could go the rest of my life without worrying for even a moment about things like "in-universe continuity," which it seems occupies a lot of people's attention these days.  Tonight I'll have to look around Netflix and see if they don't have something with Dame Judi Dench, or possibly a few Golden Girls episodes. I'd fire up The Whales of August on the DVD, but the Mister is in charge of running that infernal contraption and in his absence I simply can't get it to do anything but blink enigmatically at me.

Oh, and beside being domestic, I've been napping. If nothing else, the dogs demand it.

Is there anything on earth that sleeps with the perfect peace of an old dog? Our darling Koko has headed out past his eleventh birthday and is becoming every day more a little bit of an elderly gentleman - but he sleeps a deep, untroubled sleep that reassures me that, while he may require a little help in getting up to his favorite sofa or pant a little more than once might have been the case as we head up our hilly driveway, he remains in general good health and, on the whole, excellent spirits. He is a joy to nap with, and doing so is a highlight of my weekend plans.

* It's taken me a year, but I've at last figured out how to cook really lovely spaghetti squash. One of the two secrets is butter. Someday, if the spirit moves me, I'll pass on the other, which is really rather novel, I believe.
Posted by Muscato at 6:50 PM