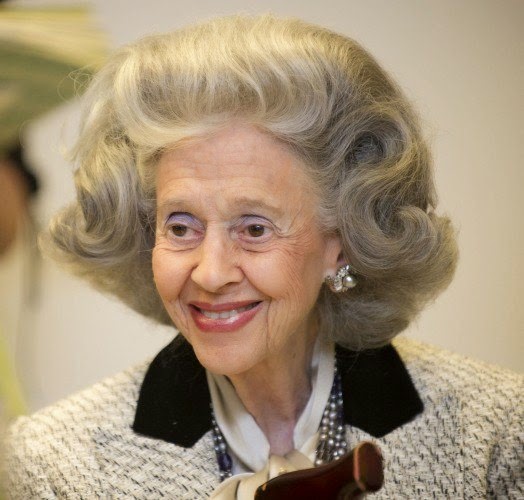 Sad news from Brussels this weekend - we're down one true-blue (and blue-blooded) Bouffant Aficionado with the death at 86 of Fabiola, the dowager Queen of the Belgians.

Fabiola was a hair-helmet early adopter, and once she settled on her signature style, it rarely varied.  For state occasions she regularly sported a barnet that looked at a rough estimate to approach three feet wide.  In her youth this airy creation was a vivid chestnut; it grew only more impressive as she went silver.

But her passing is a double loss for cosmetology, for in addition to hanging onto a hairdo that may well have been visible from space, she was also (as can be seen above) among the very last adherents of the purple-eyeshadow school of maquillage.  When you add in that she was also a fan of that nearly vanished accessory, the fan, the world of royal fashions may never really be the same.

Today's Belgian king is Fabiola's nephew, and his queen, Mathilde, is a wallflower compared to her predecessor.  Where Fabiola brought a quirky beauty that reflected her origins in Spain's aristocracy, Mathilde is a conventionally attractive woman who rarely takes fashion risks.  One only wishes that in addition to presumably inheriting some of her aunt's jewels, she would take on some of her quirks...
Posted by Muscato at 10:00 PM