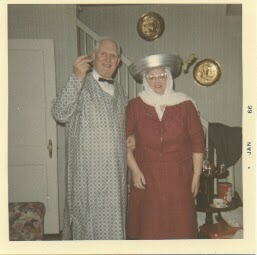 I hope your Christmas has been lovely, if you have one.  Even if not, here's your chance to see my grandparents in distinctly festive mood.

I'm guessing there's been more than one glass of Cold Duck already put away, here in 1966 in the little foursquare brick house not far from the Lake where I was a child (that year I was three).  The paternal grandparents were always the last to arrive (they rose late and breakfasted at leisure and saw no reason to alter that even for an anxious grandchild, eager to hit the tree), but, to use a phrase that seems both anachronistic and appropriate, they brought the party with them.

On this memorable Christmas, they had opened their presents to each other back in their own foursquare house (white clapboard, theirs, with a wraparound porch that served as a sort of headquarters for the entire neighborhood in the summertime), and for reasons lost in the mists of time (and Cold Duck) something about her having gotten him a new nightshirt and him having gotten her a mold of almost alarming proportions struck them both funny, to the point that this is how they showed up - one only wonders what the neighbors thought as they motored in their vast black Lincoln Continental (doubtless at my grandfather's characteristic 15 miles per hour) the two blocks from their house to ours.

They look like they're auditioning for a community theatre production of The Lion in Winter, don't you think?  Although I don't know that Henry II went in for bow ties and cigars, and I'm not sure Eleanor of Aquitaine ever wore a tailored skirt and jacket (you can tell it's before lunch; in our little town, it was vulgar to wear jewelry before lunch.  When, as on Christmas, they planned to stay all day, the ladies brought theirs with them in their pocketbooks and began adding it at noon).

On Christmas, of course, it's hard not to think of all the various ways one has spent the day, and as the decades roll by, the earliest ones do take on a rosy glow.  As part of our own (very nice, thank you) Christmas today, at some point we took a break from cooking to watch the Queen's message, and it gave me a pang when she noted, while talking about the World War I centennial, that "no-one who fought in that war is still alive."

That means, I realized, that the grandparents' world is well and truly gone.  In childhood, I spent as much time with these two dear people (and my mother's mother, and the various aunts and cousins who made up their circles) as I did anywhere, and at I times I badly miss that very particular milieu.  It was limited and insular, I know, and I'd never really want to live there, but still.  Tonight as we sat down to dinner, I thought about how the table, for a moment, captured just a little of that vanished past.  The silver gleamed, the china was two generations old even when Grandmother was a girl, and in the candlelight, listening to the old carols and eating the familiar dinner, there they were.  I don't believe in shades and spirits, not really, but were I to encounter one tonight, I think she would very likely be wearing a jello mold...
Posted by Muscato at 8:43 PM