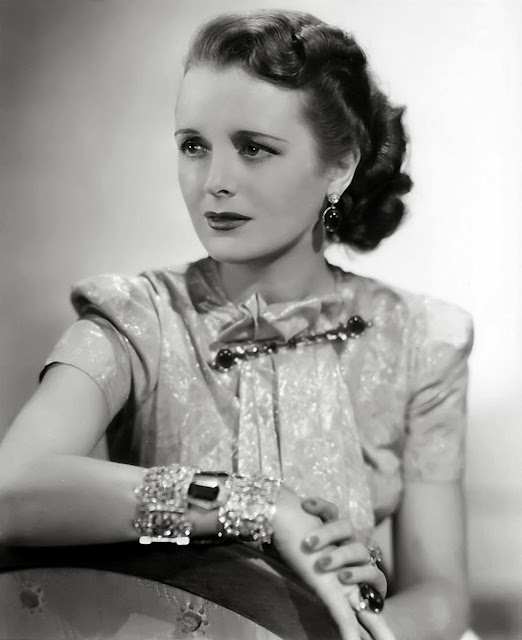 Her career places her in an uneasy, in-between sort of place - not one of the great Top Ten or so (Garbo, Crawford, Gish, Davis, Hepburn, Pickford, Swanson, Dietrich... you fill in the rest), but somewhere in with the best of the next tier down, elbowing with the likes of Irene Dunne, Myrna Loy (fabulous, but never quite, despite the "Queen of Hollywood" foolishness, toppest drawer), and Claudette Colbert - possibly falling below those ladies, but still ahead of above-the-title dames like Ann Harding, Ruth Chatterton, or the even my beloved Kay Francis (some still names, and potent ones, some less so).

Still, she worked, a lot - more than 100 films over half-a-century - and turns up in significant places from the high tide of the silents right through the '60s (and opposite fellow Warners survivor, Bette Davis, too, in Hush... Hush,Sweet Charlotte).  She always seemed a little too febrile to carry off lady parts in the style of Dunne (although she was a lovely mother in Meet Me in St. Louis) and yet a little too ladylike to be a totally believable strumpet (which is one of the many things that make her so compulsively watchable in The Maltese Falcon).

Her private life - messy, colorful, and for decades alcohol-fueled - only made her that much harder to pigeonhole. Still - you can't sneeze at a hundred pictures.  Perhaps she's the Louise Brooks that worked - someone unwilling to surrender her individuality, and yet better able than Lulu to play the games required to succeed.  I've been re-reading the masterful Barry Paris biography of Brooks, and it strikes me as it didn't when it first came out how inevitable it was that someone as mercurial and flat-out ornery as Louise would never be a lasting star.  Astor, though, shows it's possible to find a place, if not a particularly comfortable one - given not-exactly-deathless vehicles like Puritan Passions (1923) or The Devil's Hairpin (1957) - without surrendering one's spiky individuality.

And my goodness - couldn't she wear bracelets like nobody's business?
Posted by Muscato at 10:18 PM