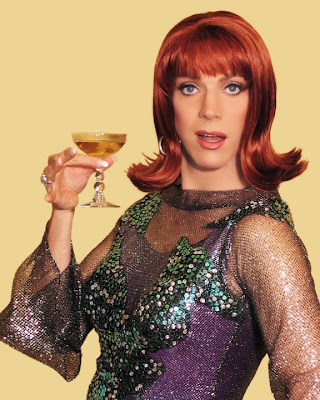 Miss Coco Peru, seen here in trademark tasteful cocktail frock and accompanying cocktail, has long been one of mine.  Like many of us, I first learned of her starry existence during her memorable single scene in the sweet little indie gaycom Trick ("It buuuuurns..."), and ever since then I've been hooked.

She's an amusing presence on film, and she even turned up on for a memorable turn on Will & Grace, but there is nothing but nothing like seeing Miss Coco live.  Mordant, scathing, and with a timing that approaches the surgical in its precision, she delivers a set that deftly combines her sharp-eyed take on the absurdities of the world and her own individual brand of glamour, of a kind that somehow combines High Executive Secretary with a certain Love, American Style lunatic groove.

When last we saw her live in Provincetown, her show included a truly moving reflection on being the odd duck out in high school (her birth name was Clinton Leupp; was there ever a moniker more guaranteed to ensure junior high bullying?).  Today she's putting her not inconsequential public profile in the service of helping her successors as students at Cardinal Spellman High School in the Bronx have a better time than she did.  She has successfully (so far, at least) lobbied to prevent a "gay reparative therapy" speaker from appearing at the school, casting welcome light on this dubious corner of pseudo-science and despicable quasi-theology.

And let's not even address the ludicrous notion of a school named for the infamous Cardinal Franny ("Dahling, your purse is on fire!") Spellman trying to pass off that kind of charlatan.  That's a little bit of bizarerie worthy of Coco herself...
Posted by Muscato at 9:54 PM