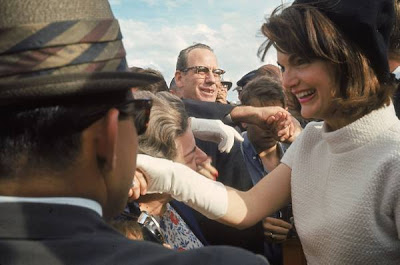 Stop time.  Have her remember why they need to leave.  Decide to fly out that night, back to the capital, fly back to the children.  Think of a reason.

It is San Antonio, Texas, November 21, 1963.  They still have to do Houston and Fort Worth.  In the morning, they go on to Dallas.  She plans to wear her pink; she hasn't worn it for a year or more, since the visit of the Maharajah of Jaipur.  She has no idea.

I first posted this a year ago today.

Since then I've thought, on and off, about the curious life of this in many ways tremendously ordinary woman, who found herself in the cross-hairs of history and so spent the rest of her life finding a way to survive that shattering experience.  She was not, and definitely not, approved of in our house when I was growing up.  Even at the lowest low, however - trying too hard in her late '60s minidresses or later, technically a widow but somehow with the louche air of a divorcée ("no better than she ought to be") - the harshest criticism was also, in the end, leavened - "...of course, you have to remember what she's been through..."  Not enough to redeem, but enough to explain.  And even, to a point, forgive - "...and she was so lovely in the White House..."   She was, but all that ended, fifty years ago.
Posted by Muscato at 9:19 PM