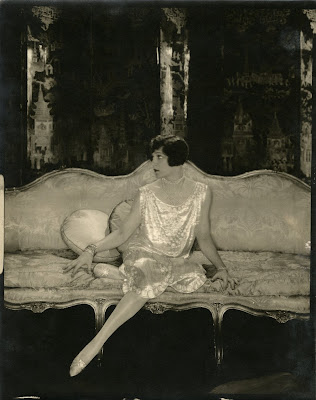 Brady's career is a nice example of both the richness of casting available to the studios back in the day and the dilemma that faced theatrical favorites as they considered their place oncscreen. A leading name on Broadway from the teens, Brady made dozens of silent films without ever really compromising her reputation with stage audiences as a glamorous leading lady, adept at both arch comedy and serious drama (and you don't get by in O'Neill, and especially not in Mourning Becomes Electra, on a cute profile and your comic technique - just ask Rosalind Russell).

When talkies beckoned, she likely thought she could follow in the footsteps of fellow luminaries like Ruth Chatterton and Helen Hayes, who essentially transferred their stage personae onto the soundstage, playing great ladies, socialites, and other parts that called for poise, diction, and the kind of wardrobe we see above.

Instead, Brady found herself in the company of theatrical veterans like Billie Burke and Spring Byington, players who discovered that what registered on Broadway as ladylike chic and nervy elegance made Depression movie audiences giggle. Rising 40, with features a little too broad for movie beauty and a definite tendency toward the dithery, Brady was transformed into a character lead, often a supporting player; of course, she also found a niche that guaranteed her, whether playing a foolish mother in Our Man Godfrey or the lady whose cow burned down a metropolis In Old Chicago, a kind of immortality.

Sometimes, before her too-young death in 1939, she must have wondered - even with the praise, the cash, and the Supporting Actress Oscar - whatever happened to the star whom Steichen saw. That her fellow stage ladies fared a lot less well than she over the long haul (with Chatteron, Hayes, and fellow travelers like Tallulah Bankhead all heading back to Broadway by the mid-thirties) must have helped. And, come to think of it, the cash couldn't have hurt as well...