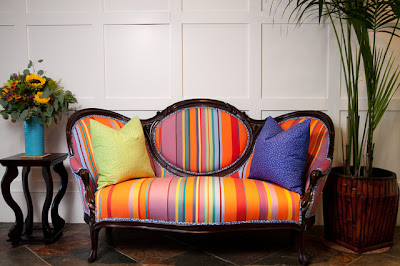 Over in his cosy corner of the cyberverse, dear Cookie has been regaling us with tales of real estate and family furniture - perennial hot topics, both, whenever two members of my extended family gather.  The Farm and Why We Lost It looms large, as does We Never Saw That Chiffonier Again After Your Aunt Ginnie Got Her Hands On it, and variations on both can take us well into the night, outlasting both patient spouses and the cocktail supply (the former by a lot, the latter only very slightly).

Quite independently of all that, I've been thinking of furniture now and again, mostly in the form of wondering whatever happened to mine.  Oh, I know, well enough, but after all these years overseas, it all feels rather abstract.  Back in the beginning, when the Great Emperor Clinton ruled the West, I thought I'd take a flyer and see what the expatriate life might be like.  I gave up my (rue the day - rent-stabilized!) Manhattan apartment and, on the instruction of my new employer, put all my things into storage.  "Don't get rid of too much," they told me, "Many people only spend a year or two out and then come back to the Home Office."  Well, we know how that turned out.

So there it all sits, still, my life more or less frozen in amber, some two tons of it (what?  A lot of it's books), as it existed back when Cher was having her seventeenth or twenty-third comeback with "Believe."  Among the great mass of regrettabilia that I can still remember are something on the order of 160 snowglobes (a passing fancy that snowballed, as it were, into a collection only because people kept giving them to me), an acid-washed tour jacket for a production I worked on (which I might still be able to wear, were abbreviated boleros ever to have an unexpected renaissance), and, I think, a fair amount of the product of Catalina Studios, on VHS.  Surpassing all that, however, in terms of sheer bulk, is a remarkable amount of Victoriana, much of it passed on from relatives - three china cupboards of various capacity, a bowfront secretary, several clocks, a great many spindly end tables, and so many impractical things on which to sit that, for a while, some of them hung from the walls and some acquaintances referred to my place as "The Chair Museum."

"Your apartment," a friend once told me, "is very nice.  For an exiled archduchess.  For you... well, I'm not surprised you're single."

Were all of that ever to descend back on me - now us (and so there, Gene Boarderman!*) - I'm not quite sure what we'd do.  Some of the things have sentimental value; some fewer are inherently attractive; and as for the chairs, my grandfather's vast tufted armchair aside, I'm not sure there's a single one on which either Mr. Muscato or I could sit without endangering it and us.  Market wise, the bottom has fallen out of nineteenth century furniture, and none of my various nieces and nephews show any sign of wanting to become the next generation of caretakers.

All of which brings us to the image above, the work of one Darci Goodman, who put this rather beguilingly rethought settee into a "Colorful Ranch House" she designed.  You see, sitting there in some East Coast warehouse, among the tawdry videos and doubtless now unusable rolled-up carpets, is a love seat very like this one, albeit still clad in the dowdy hunter-green shot silk I put on it when Grandmother's lilac velvet finally gave up the ghost in 1989.

Perhaps, when my Long Lost Possessions and I are finally reunited, this is the way I'll go: throw caution to the wind and run a little wild.  Having had the domicile of a Pym heroine in my twenties and thirties, perhaps I'll become the male equivalent of those women who constantly recite that "When I am Old I Shall Wear Purple" poem and decorate wildly.  I'd like that settee in my foyer, wild orange stripes and all; I can only imagine it will go better with what I've picked up on the road - African totems and huge Ottoman brass trays, Egyptian knick-knacks and such - than the shot silk.  Rather nice to think: while I may have no choice but to grow older, at least my taste can grow a little younger as the years roll by, no?

* Name changed to protect the catty and inaccurate.
Posted by Muscato at 12:59 PM