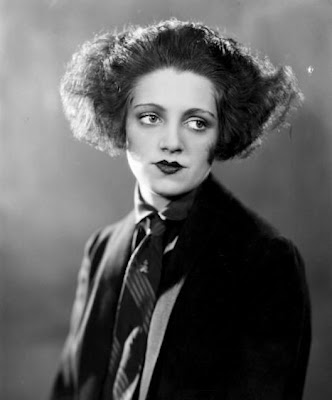 I think I could be forgiven had I been tempted to save this particular birthday girl to use as a future Mystery Guest.  Would you have connected this rather alarmingly coiffed, mildly Tallulahesque denizen of the '20s with Maude Findlay's sharp-tongued factotum Mrs. Naugatuck?

But it's true, for decades before Hermione Baddeley became beloved of a generation of young filmgoers as the housemaid in Mary Poppins or, later on, traded barbs with Adrienne Barbeau, she was a stalwart of the British stage and screen.  Of all the things she did, I think, the one I'd trade my eye-teeth for (such as they are) would be the chance to glory in her turn, alongside her namesake, the immortal Hermione Gingold, in their pal Noël Coward's Fallen Angels.  That, I am quite sure, was a memorable night in the theatre.

I feel especially lucky today, for in my quest to find a good snap to pay tribute to Hermione B., I happened across a rather enchanting new destination:  The Fabulous Birthday Blog.  I can't think how I've missed it 'til now.  Go there immediately, but do come back; it gets lonely here without you...
Posted by Muscato at 1:24 PM