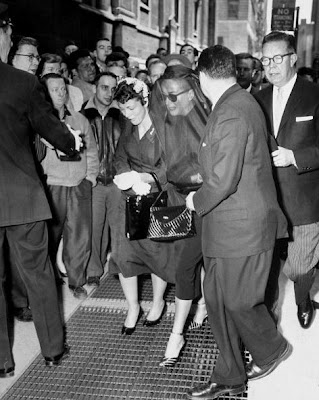 Today, we're used to seeing famous people in disarray - either of their own making (coffee cups in hand, strolling around in torn shorts and sloppy tee-shirts, heedless of the telephoto lens) or of the relentless photographers' (that startled, universal expression that just precedes a more definitive response as some star or starlet leaves a nightclub, clandestine lover's house, or doctor's office).

Once upon a time, though, that wasn't so.  Stars were distant, perfect, glimpsed only at the behest of trusted studio photographers or social-column snappers who might get an idealized glimpse tableside at Ciro's or the Coconut Grove.  Those few who were, as it were caught in the act (often related to arrests, courtroom testimony, or similar indication of personal and professional turmoil) seemed, even more than ordinary mortals would have been, exposed, and somehow diminished (think of Robert Mitchum in jail, or Frances Farmer, dishevelled and struggling as she's dragged into night court).  Some survived this violation of the terms of fame (Mitchum came back); some didn't (Farmer sank into madness and obscurity, in part at least for so blatantly trampling her glittering blonde image).

All of which makes this picture all the more arresting. Joan Crawford was the absolute acme of the star-as-control-freak, the ultimate product of the ultimate studio, MGM.  Whether dining at PickFair at one end of her career or opening a Pepsi bottling plant in Paraguay at the other, she was always perfectly turned out, perfectly composed, perfectly... perfect.  And always, always, portrayed on her own terms.  Even her films - laden as they were with melodramatic excess - rarely, in the course of limning extremes of emotion, required the star to do more than look obdurately into the middle distance, a glycerine tear coursing a careful trail down her meticulously pancaked cheek (in a way, that's what makes her occasional moments of violence - slapping the egregious Veda in Mildred Pierce, for example - all the more bracing).  Oh, there were rumors, even at her height, that presaged her posthumous savaging at her daughter's hands, but they were offstage, distant thunder.

Here, though, she's giving way.  It's 1959, the funeral of her fourth and final husband, Al Steele, and although she remains beautifully dressed (although some might say the matching purse and pumps are just that little bit too much), for once her face betrays her, despite (perhaps because of?) the mask of veil and sunglasses.  Here she's Joan Steele, genuinely distraught, or as genuinely as Joan Crawford can be after, at that point, more than 30 years more frequently indicating than feeling deep emotion.

Of course, she was spared the indignities that would be heaped on a star in this situation today - the microphones in her face, the mandatory questions ("How does it feel, Joan?" "Are you going to miss him?" "Where's Christina, Joan?") and the obligatory self-disclosure - right there, in the street; on talk shows; on Twitter ("@MrsSteele: Can't express too much my sorrow - we had the Best of Everything (in theatres now)").  Still, it's disconcerting.  You feel for her, for her double distress (at her loss, and at being seen experiencing it); it's an embarrassment, of a kind, and yet you can't look away.  Mine eyes dazzle; he died young, even if she didn't, and even if with her went the expectation that this sort of thing would be the exception rather than the rule of stardom.

Photo from the invaluable The Best of Everything: A Joan Crawford Encyclopedia.
Posted by Muscato at 1:20 PM