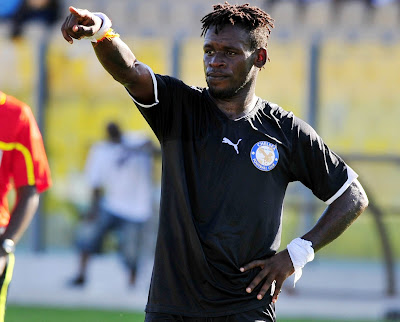 Yes, you read that right.  There must be something in the air, or in the water, or perhaps it's the lingering effects of those games that the Duchess of Cambridge spent so much time at these last couple of weeks, but not only did dear Peteykins of Princess Sparklepony fame yesterday run not one but two at least tangentially sports-related items, but now even here at the Café, we've gone all athletic.

Or at least we're thinking good thoughts about athletes.  Perhaps you could say we were athletic supporters.  Or perhaps not.

In any case... The very vigorous gentleman above, you see, has been the topic of much conversation of late at the Villa Muscato.  Specifically, I've noticed Mr. Muscato talking about him with the many Egyptian pals with whom checking in for long phone/Skype conversations almost daily is apparently a core aspect of Ramadan devotions.  Generally, these chats cover topics such as What We Had for Breakfast (which is supper, which remains confusing even after nine years), What [Insert Actress Name Here] Is Up To On Her Ramadan Soap Opera This Year, Slutty Queens Other Pals Are Dating/Have Dumped/Will Absolutely Bag After Ramadan, and, being Egyptian, How Much They Miss Mama.  Politics figures, but rather depressingly of late.

Football has its place as well, but I've noticed that this year's iteration of that portion of the conversation is repeatedly interrupted by laughter - loud, raucous, and prolonged.

This man, it turns out, is the cause.  He is a Ghanaian by birth and in the last few years has played in Europe and for teams at home.  Once upon a time I lived for a while in Ghana and loved it, so at first I thought it was some aspect of a place I love that was being derided and was distinctly chilly about it all.  Far from it, it turns out.

You see, Mr. Clottey has in recent months been under consideration for recruitment by one of Egypt's leading teams, El Ahly.  Ahly is one of the two big Cairo teams, and loyalties run deep both with it and with its arch-rival, Zamalek.  Having lived in the neighborhood of the same name, I'm an ardent Zamalkawi, while Mr. Muscato is a fervent Ehlawi.  We try not to let it get in the way of things too much.

The problem with the prospect of this gifted and not unpleasing young sportsman coming to play along the Nile?  Cue the screaming laughter from Egyptians, for the problem is his name.  "Clooti," you see, in the Egyptian dialect - and it really is pronounced exactly like the poor man's family name - means "my panties."   Say it aloud a couple of times.  His presence would force Cairo's sports announcers to keep a straight face while saying things like "...the ball goes to My Panties," "watch out! The fielders are tackling My Panties," and even, "Now the whole game rests on My Panties."  The gang just can't get over it.

Although it seems that the prospect of Mr. Clottey heading out from Accra seem to be fading, having gone in search of him proved worthwhile even absent the saga of his moniker, for it enabled me to find this memorable image of a happy Ghana fan: 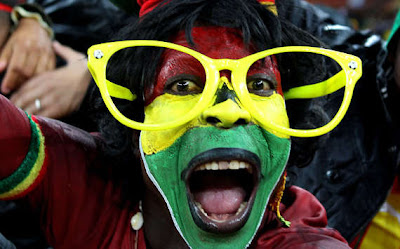 Personally, I think Miss Richfield 1981 ought to sue.  Or start a franchise.  Either way - isn't she great?
Posted by Muscato at 10:27 AM