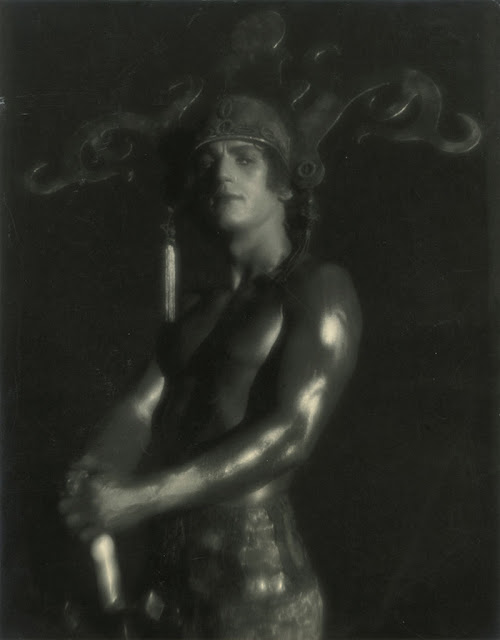 Today's birthday boy, who turns a youthful 131 today, is not in fact the glistening creature seen above; no, he is instead the director who gave birth to this and countless other memorable images and who, thanks in no small part to a movie in which he appeared but did not direct, is best remembered as "Mr. DeMille (I'm Ready for My Close Up)."

Cecil B. DeMille's legacy in pop culture is a funny thing, reliant on his own late-in-life self-promoted image (all jodhpurs, monocle, and riding crop) and his last few pictures, which were bloated, pompous things in comparison to many that preceded them over his long career.  Those who only know DeMille from his second go at The Ten Commandments would be amazed at the slick, cosmopolitan melos that first made Gloria Swanson a top star, with racy titles like Why Change Your Wife? and (the picture from which this still is taken) Male and Female, as they would be even by his earlier epic pictures like King of Kings or the first Ten Commandments, which managed to combine solemnity and salaciousness in a very audience-pleasing sort of way.

When it comes to Male and Female, there's no question - even in that Ziegfeldian headgear - on which side of that equation the gentleman pictured, leading man Thomas Meighan, stands, is there?

This high-toned lubriciousness was the kind of thing in which earlier DeMille excelled - giving moviegoers a touch of inspiration (from the Bible, often, or, as here a hit play by J.M. Barrie, of Peter Pan fame) accompanied by a hefty dose of sex and other thrills - Mr. Meighan, above, or Miss Swanson menaced by a lion in Male and Female; Claudette Colbert, in her alas too-brief exotic phase, eponymously as Cleopatra or as Poppaea in Sign of the Cross; a decadent Dirigible Ball in Madam Satan.  By the time you get to Chuck Heston parting the Red Sea or the odd spectacle of the, shall we say, disparate acting styles of Betty Hutton and Jimmy Stewart crossing paths in The Greatest Show on Earth,  that earlier DeMille seems very far away indeed.

Personally, I think it's no accident that the end of his more interesting phase coincides with his experience directing my least favorite of all the Hollywood ladies, Miss Loretta Young.  Perhaps once he survived her Berengaria of Navarre in The Crusades, to which role her blonde-banged wig brings more verve than the lady herself, he'd had enough, and decided it was easier to direct pyramids and herds of circus elephants than actors.  You can hardly blame him.
Posted by Muscato at 2:01 PM